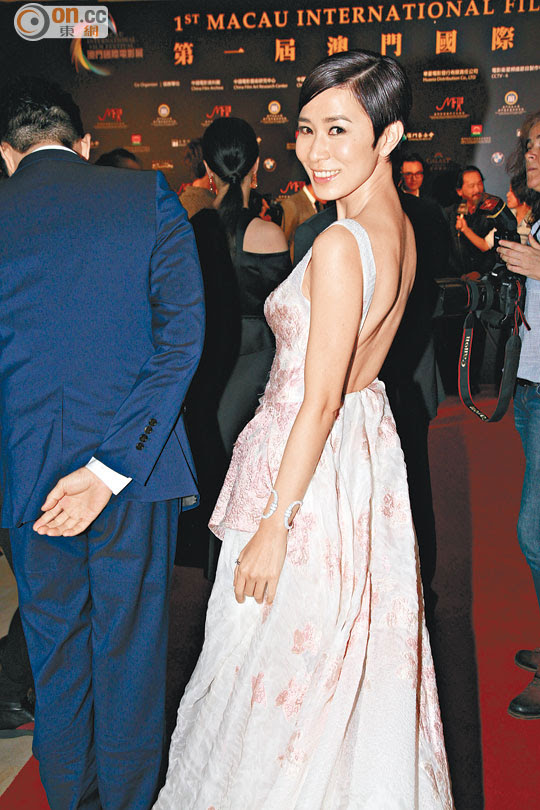 Ah Sheh and Chi Lam walked the red carpet like it was a wedding. Chi Lam said that everyone thought too much about it and also revealed taht next month he will go to the Macau Observation Tower for an important scene in the film RETURN OF THE CUCKOO (SUP YUET CHOR NG DIK YUET GUONG). Although he had no fear of height, the stunt would be very exciting. He also said that he would not expect Ah Sheh, otherwise her old neck injury would be hard to recover from. Ah Sheh said that she was not afraid of heights either, but her old wound would heal.

Speaking of the TVB series THE GREED OF MAN's late night television re-run fever, Chi Lam who has worked with elders like Damien Lau Chung Yan and Adam Cheng Siu Chau admitted that he looked forward to it very much. When will he return to TVB for a series? He said, "I am ready and waiting!" Ah Sheh said that the soonest she would return to TVB for a series would be next year. If THE GREED OF MAN was made into a film, she would like to play the Cheap Girl character because at the time she really liked this character. Director Johnnie To Kei Fung earlier criticized the Hong Kong series quality. Ah Sheh felt that the company would accept the opinion. She too knew the new TVB investor Li Ruigang because he was the TVBC boss.

Sum Yau's new film MY WIFE IS A SUPERSTAR (NGOR LO POR HAI MING SING) just wrapped. She will have a week off and plan to go on a vacation with her mother, but she has not picked a place. Sum Yau revealed that she and Si Hing (Wilfred Lau) just made the film DUNG TAP HA DIK LUEN YUN in Macau. She even had to dance an Indian dance and lured in Si Hing with her eyes. She felt it was very challenging but she could not help but break into laughter because Si Hing's serious look was very funny. She also revealed that it was the first time that Si Hing worked on a romantic scene so he was very nervous. However they did not have any intimate scene because their relationship scene was light yet powerful.
Posted by hktopten at 8:18 PM