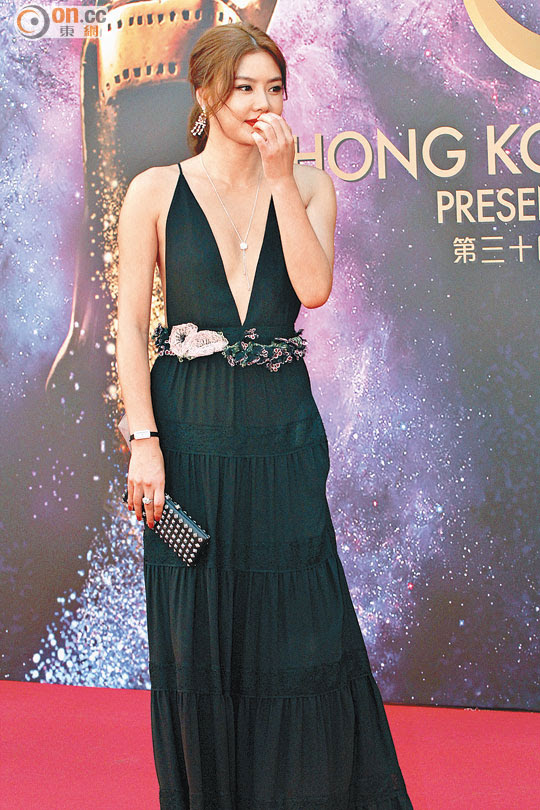 The 34th Annual Hong Kong Film Award took place last night at the Cultural Center and the red carpet ceremony began around dusk. Artists from three lands on both sides of the Strait appeared. The event set up a "Best Dressed" award, which went to Tony Leung Chiu Wai and Sandra Ng Kwan Yu.

Kwan Yu was surprised but very happy because suddenly she got another award. As for the reason that she won, judge Gaile Lok said that she was dressed comfortably, which was confidence; Kwan Yu said that she did not mind not winning Best Actress. This award was a surprise and she thanked her daughter for picking up this dress for her. Guest presenter Wai Jai left immediately after presenting the award.

Among all the female stars on the red carpet, the sexiest probably was the "Best Dressed" judge Gaile Lok. Speaking of her judging standard, she said that she would mainly look at what they wore instead of who they were.

Chin Kar Lok brought his pregnant wife Angela Tong Ying Ying. The four months pregnant Ying Ying still wore heels. The media asked Kar Lok to kiss his wife's big belly, but he only touched it. They already knew the sex of the child but they would not announce it yet. Would the result be very happy (one son one daughter)? Kar Lok said that he would be happy no matter what, mainly he wanted his daughter to have a companion. Ying Ying revealed that during the pregnancy she has not felt nauseous or uncomfortable. Kar Lok joked that now he has become Ah Sei. "I used to have dot, now I don't even have that. (What did you give to thank Ying Ying?) I have an even harder time. I used to make her do everything, now I have to it."

Ethan Juan (Yuen Kin Ting) last night presented the Best Supporting Actress award. Earlier he and girlfriend Tiffany Hsu were rumored to have broken up. The media asked about his relationship. He said, "I am still wearing a ring, no problem. (Would the incident speed up your wedding plan?) Two different matter, we are fine now. (Get back together?) We never broke up. (Has the cooling period ended?) You are too nosy. (How did you coax your girlfriend?) We have always been great. (Yet she seemed to have hinted on facebook?) But she didn't write my name. (Is your relationship better than before?) We have been together for so long, we also have each other's future in mind. I hope everyone would give us more space because managing a relationship isn't easy."

Vicki Zhao Wei and Huang Bo spoke to the press together. As the Best Actress favorite, Zhao Wei said that every time she did not know until the last minute so she was just her usual self. Whether she wins or not she would eat and drink. As for the recent stock market surge that reportedly increased her worth, she only said, "That's not something that I did. (Did you make a lot?) I am not talking about that because it's a family matter." Choi Cheuk Yin was walked the red carpet with Simon Yam Tat Wa. She was dressed in red, was it lucky for her? Choi Cheuk Yin said that she only wanted to stand out a little. Best Actor favorite Sean Lau Ching Wan and wife Amy Kwok Oi Ming appeared together. He said that he was already happy with the nomination and hoped that everyone would continue to support film. Would Kwok Oi Ming like to work with her husband again? She said there was no need, everyone could just watch the TVB series THE GREED OF MEN (DAI SI DOI). Ching Wan also felt that a series that was well worth remembering because it was his last series at TVB. It was the perfect end for him and helped him to get a good wife.

One of the hosts Miriam Yeung Chin Wa walked the red carpet with five LITTLE BIG MASTER children in tow. She hoped that next year she could be nominated for Best Actress with LITTLE BIG MASTER. She looked forward to attend again next year with the five children, as she believed that they would be the youngest nominees. Her son infected both her and her husband. Although her son has already recovered, her husband was still ailing so he could not attend last night. Her voice has not completely recovered either. "I am a martyr, I can do with a great voice and I can do with a rotten voice." Was she worried about improvisation from other hosts? Chin Wa admitted that she was already prepared. She only remembered 30% of the script, the other 70% would rely on creativity. However she memorized the winners' important information. During the TVB live interview she said to the camera, "Torres, Mommy misses you."

Suffering from depression earlier, Ellen Loo (Lo Hoi Tung) was nominated for Best Film Score. When asked about her illness, she said that she was much better so she came. She said, "Earlier I didn't dare to com out. I have been in treatment for a year and a half and I am almost healed. Although I still take medication, it doesn't mean that I am not well. I only want the condition to be more stable." She even revealed that in the future she will publish a book and have an art exhibit. The new book will be about her condition and her experience over the year. As for how she got sick, Lo Hoi Tung said that it was from the enormous stress from work and how demanding she was. It might have been hereditary.

Shu Qi pouted when asked if she liked her dress. "I don't like it that much because it's very hard to walk in and I couldn't eat in it." She said that the Hong Kong Film Award would not affect her Cannes Film Festival appearance, at any award show she would just be herself.

Best Actors Tony Leung Chiu Wai and Nick Cheung Ka Fai showed their support. In sunglasses Wai Jai was asked if they were a part of his look. He said, "No, the lighting here is hard on the eyes." When asked why Carina Lau Ka Ling did not come along? He said, "Sister Ka Ling is very busy." Wai Jai said that earlier he experienced life and stayed in Hong Kong to rest. Later he will return to work, first he will work on FERRY MAN, then he will have one or two more projects. Lately he read many scripts that felt great so he took the roles. Because his films were too solemn before, he really wanted to make a comedy. The next few films will be comedy.

Also in sunglasses, Ka Fai was dressed in denim and casually walked the red carpet with Amber Kuo. Midway he stopped to tie his shoes and left Amber Kuo looking awkward. Another Best Actor Anthony Wong Chau Sun carried an umbrella, which he said was very expensive but he brought it in case of rain.

Archie Kao and his new film co-star Qin Lan walked the red carpet. Expressing an interest earlier to develop in the Chinese film market, he still had a mouthful of English. He revealed that his wife due to the Beijing Film Festival was unable to fly to Hong Kong. Did his wife hand him any speech in case she wins? He said, "No, I can say whatever I like."

This year the Hong Kong Film Award used a drone to shoot the red carpet. When Ivana Wong Yuen Chi saw it she was caught off caught for a moment.
Posted by hktopten at 11:35 AM