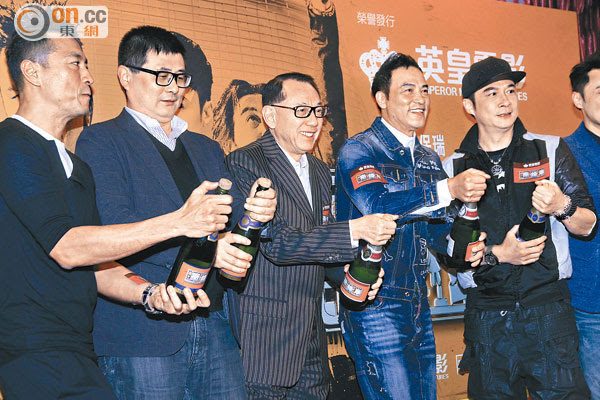 Simon Yam Tat Wa, Francis Ng Chun Yu, Patrick Tam Yiu Man, Philip Keung Ho Man and boss Albert Yeung Sau Sing last night attended the film TWO THUMBS UP (CHUNG FUNG CHEH)'s celebration in Wanchai. After 12 days in release the film made HK$ 9 million. Yam Tat Wa earlier was overseas and could not promote the film. Chun Yu immediately joked that "Does the vacation make him the boss!" Then they traded verbal jabs over the air. Yesterday they both appeared and immediately proposed a couple toast to prove that they were not at odds. Brother Wa and Chun Yu said that Leo Ku Kui Ke and Mark Cheng Ho Nam were not present, so they were at fault. Brother Wa immediately joked, "Does singing make him the boss!" Chun Yu also joked, "I am not attacking him, it's a fact, although Brother Wa has already stolen all the spotlight in this film."

Chun Yu and Brother Wa said that they have turned down many jobs to attend the celebration. Brother Wa just returned from the Mainland. Would the film make a sequel? Brother Wa said that if it would he would treat grudges with kindness and fight for Gei Jai's role. Later Chun Yu continued to said that during the shoot Gei Jai treated them to roast pig sticky rice, he joked that he was very vicious because he knew that they had to lose weight.

Hak Jai dropped 30 pounds from 180 some pounds, now he weighs around 150 pounds. He said that his wife complained about him losing his butt. Tam Yiu Man also slimmed down a lot. He said that he was always bloated, but lately he went from 160 some pounds to 148 pounds. Later he heard that Hak Jai wanted to have a child and said that it would be easier with chocolate because it was romantic. Hak Jai said that he wanted a daughter.
Posted by hktopten at 2:27 PM