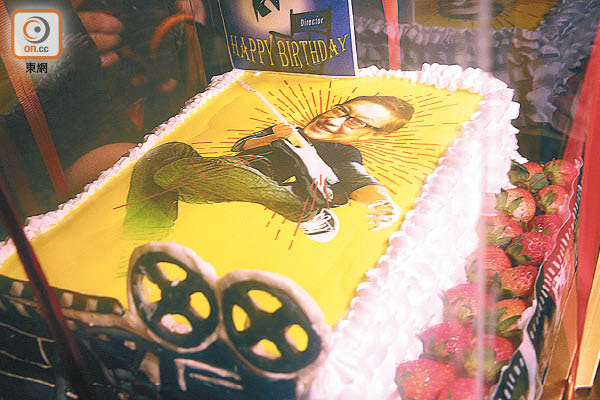 The venue was decorated with director clapping board and cameras, as someone brought a cake with a photo of the director with a guitar.

Around 6PM, birthday boy Lau Wai Keung appeared with his wife Lai On Yi. A poster of the director jumping with a guitar was place outside. As for birthday wish, Lau Wai Keung said, "I wish to be healthy, everyone would be happy, everyone would have jobs, and the new film to be a hit. (Did your wife drop any hint?) No, I am grateful to her for taking care of the family and the children. I feel very comforted."

As for work, he said that his film THE FOUNDING OF AN ARMY will open at the end of July. Today he will go to Beijing to prepare for the April 13th production start for a new film, but he could not reveal any detail yet. Since he had to fly, would he not able to thoroughly enjoy the birthday party? He said, "Kind of, it will be an afternoon flight. After 10PM everyone could go home and sleep." With three sons and a daughter, he revealed that his daughter will go to New York for higher education in August. "She will study psychology, she says she wants to treat Dad because Dad's mind is not balanced. When my daughter goes away for school, I am both happy and sad. I want to take time to start school with her. Earlier when the sons went to school I didn't go with them, obviously I am playing favorites."

Fung Tak Lun was asked why his wife Shu Qi did not come along. He said that his wife was working overseas and he was her representative. Earlier they had a lot of fun in Japan. He said, "Really? (Are you so sweet normally?) I try not to talk about personal stuff." He revealed that lately he has been busy with his film post production. Will he visit his wife on the set? He said that he already went last time and hurried into the venue.

Recently returning to work in Hong Kong, Yip Suen revealed that her gift was some home decoration. She will stay for two or three days on this trip. Why did her boyfriend not come with her? She said, "He has a job in the Mainland, not in Hong Kong. (Earlier you were rumored to have broken up then married?) There are a lot of messy rumors. (How is your relationship?) OK, I very rarely think about the future. Thank you everyone for your concern." Would she say yes if he would propose? She said, "He hasn't yet. I don't want to think too far ahead. I won't know until he proposes."

Chong Sze Man brought a pink gift. She revealed it was a men's fashion item. She used to give wine, but a lot of people would as well.
Posted by hktopten at 8:19 PM