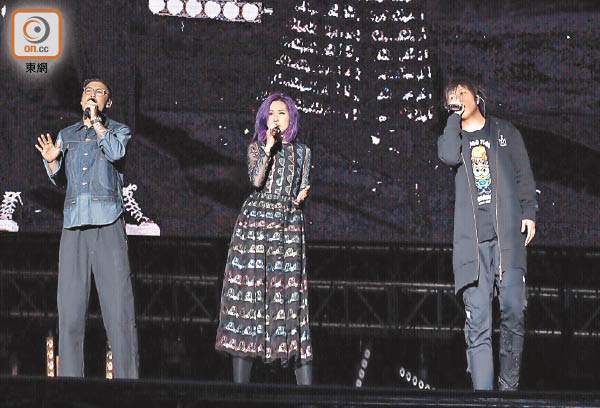 Always wanted to appear from the stage elevator, Shawn Yue Man Lok earlier while guest performing in Miriam Yeung Chin Wa's version of WHEN I THINK OF YOU and its music video stated that his compensation would be raising to the stage at her concert once! Two days ago Lok Jai fulfilled his dream early. The stage was Mayday's Dalian concert. He performed in front of over 400,000 viewers. Lok Jai excitedly jumped from under the stage with Chin Wa in tow. Chin Wa joked that after 8 years of knowing him, she has never seen Lok Jai this cute like a young girl!

After the performance, Lok Jai excitedly said on the stage, "Many first time of my life took place today. I never thought that I could be Mayday's guest, this was the first surprise; the second surprise was I never thought that I would be in Dalian, singing in front of so many people. Thank you!" Chin Wa thanked Mayday. "Because of your song, Cherie and Jimmy went from words and music to living in our lives." Lok Jai said, "Because without your song this movie wouldn't be here. Have you thought that Chi Ming would look like this?" Ashin said, "You are prettier than we imagine." Chin Wa said that 8 years ago when they made the first film, she never thought that she would be able to participate in Mayday's performance. It was very worth remembering, so they took a selfie with the audience.

Later Ashin said to them, "Today we come to 'Life Co. Ltd.' you can't punch the card to get off work so easily. You have to sing a song, so everyone would be willing to go to the movies to show their support." Lok Jai said, "I don't know if they would want that? I am afraid it would affect their mood, are you certain it's OK? Don't yell at me if I don't sing well!" Then they again sang Mayday's SUDDENLY MISSING YOU SO BAD. Over 400,000 viewers waved their glow sticks and sang along.

Before the show, Chin Wa and Lok Jai signed "Cherie Yu" and "Jimmy Cheung" on the LOVE OFF THE CUFF original soundtrack and presented it to Mayday. They returned the favor with their autographed record.

After the show, Chin Wa was still excited. He softened his stance from earlier when he declined to sing again. "I really have never performed at a concert with so many people, it was very high, very happy, I was very reluctant to leave. I hope to do it once in Hong Kong!" Chin Wa also said that she was very happy. "I never thought that Jimmy Cheung and I would be guest performers at Mayday's concert. Because Chun Giu and Chi Ming came from Mayday's song, today was our first reunion in 8 years. It was very touching. I wish I can start a concert now, even going to the karaoke box now. However I have to keep promoting." She revealed, "Yue Man Lok is very happy, he was backstage jumping from the room to the stage, skipping like a young girl. My mouth was wide open, it really was a great happy discovery. After 8 years of knowing him it's the first time I saw him like this, it is an unusually memory that would be hard to forget!"

With the success of the new film LOVE OFF THE CUFF (CHUN GIU GAU JI MING), Miriam Yeung Chin Wa took "Cherie Yu" and "Jimmy Cheung"'s classic line at their convenience store from the first film and had a little fun with the Hong Kong and Mainland box office. She said, "Mainland box office was over 60 million (RMB), Hong Kong box office broke 6 million (HK$), Yue Man Lok is called 'Uncle 6'. With three 6's in this hand, what am I waiting for? Ah Lok is also called 666, I have to thank 'Lok Gor'!" Lok Jai stated that the team put their hearts into making the movie and promoting. For days he, Chin Wa, the director and actors split up to promote. The box office success was very encouraging.

Lok Jai's girlfriend Sarah Wang went to the movies with a big group of friends to see LOVE OFF THE CUFF while Lok Jai flew to Dalian for a show. Later Sara Wang posted on instagram, "We watched a great movie! #Jimmy is very manly #great" Lok Jai immediately replied, "I know".
Posted by hktopten at 6:10 PM