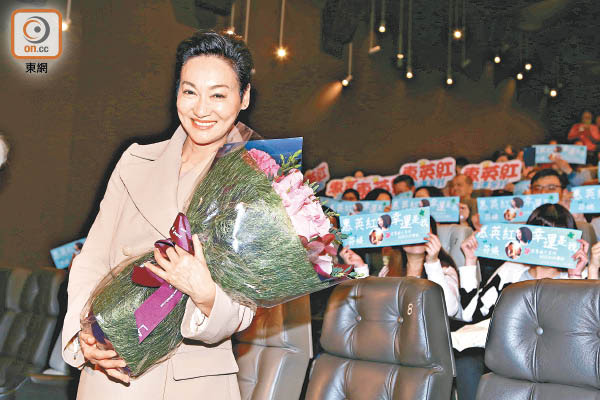 Already in its second re-release, HAPPINESS will be shown for four days. Sister Siu Hung stated, "The re-release won't help the company make a lot of money. If everyone feels it's entertaining, you should recommend it to family and friends. I hope to deepen everyone's knowledge of Alzheimer's disease. I don't have any fan, my friends are my fans!"

Although the award show has already ended, Sister Siu Hung was still emotional and very happy. She said, "That night when I won I was very nervous. (So nervous that you fell?) I got up to go to the stage, I wanted to pick up the dress but it was too tight. (Did you already share the joy of the award with Mama?) Actually I already told Mama right away, but because Mama's grave was new I couldn't go there yet. Otherwise I would make the ancestors suffer. Each time I have been nominated and won, I feel I have a lot of friends. That night after the celebration, I realized that I received over 600 messages. I actually have so many friends. Later I will still have several more celebration dinners. The team has given me three days off. Very soon I will return to work." Speaking of Tsang Chi Wai's Best Supporting Actor troubles, Sister Siu Hung said, "They both deserve it. Actually it's very hard to be calm on the stage. Even with Chi Wai's experience, on the stage he still is a mess. Otherwise he wouldn't have so many troubles. I was dressed very prettily but on the stage I cried and looked very ugly."

Ng Yip Kwan did not win Best New Performer. He said, "I am not disappointed. From the day I was nominated I already said that I was 'bottom of the barrel', but I was still very happy because I was already very honored to be nominated. I hope in the future I will be able to play even more different characters. (Would you be like Tony Leung Chiu Wai and 'show your eggs' in a movie?) I can show anything, I can even show the yolk!"
Posted by hktopten at 5:50 PM