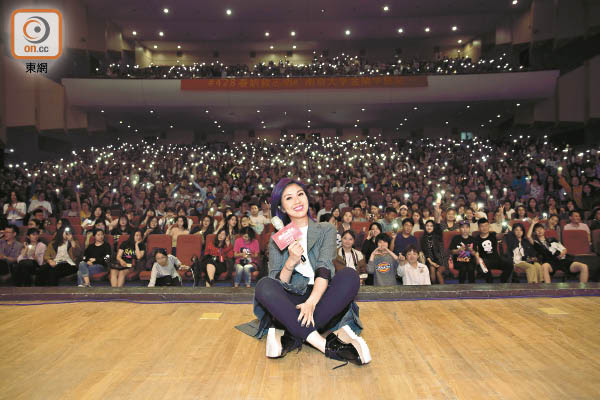 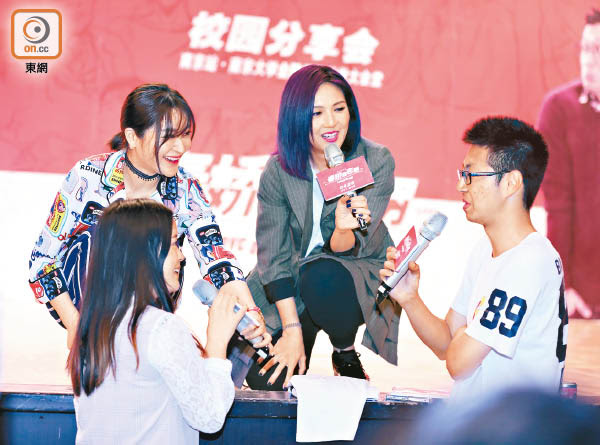 Miriam Yeung Chin wa recently has been promoting her new film LOVE OFF THE CUFF (CHUN GIU GAU JI MING) nonstop. Two days ago she appeared in a Nanjing university to attend "Memorable Cherie School Share". Over 1,000 students attended. Chin Wa not only sang solo but also with students. She even performed MEMORABLE SPRING BEAUTY as requested. She even became "Sister Cherie" possessed as she played matchmaker for singles and answered romantic questions for students. An older woman and a younger man asked Chin Wa for relationship advice. He complained that his girlfriend nagged him like his mother. Chin Wa said, "If my husband said that? He would be dead for sure!"

Later the host invited different couples for Chin Wa to answer their romantic questions. One of them was a story of an older woman pursuing a younger man. Chin Wa joked that they were counterfeit Cherie and Jimmy. They have been dating for half a year and asked Chin Wa for the ways of such a relationship. Chin Wa said, "The most important is communication, thinking and target direction are uniform." He said, "She is quite a bother, like my Mama!" Chin Wa joked, "If my husband said that? He would be dead for sure!" As the event neared its end, Chin Wa took a selfie with students and their phone flash lights.
Posted by hktopten at 6:01 PM