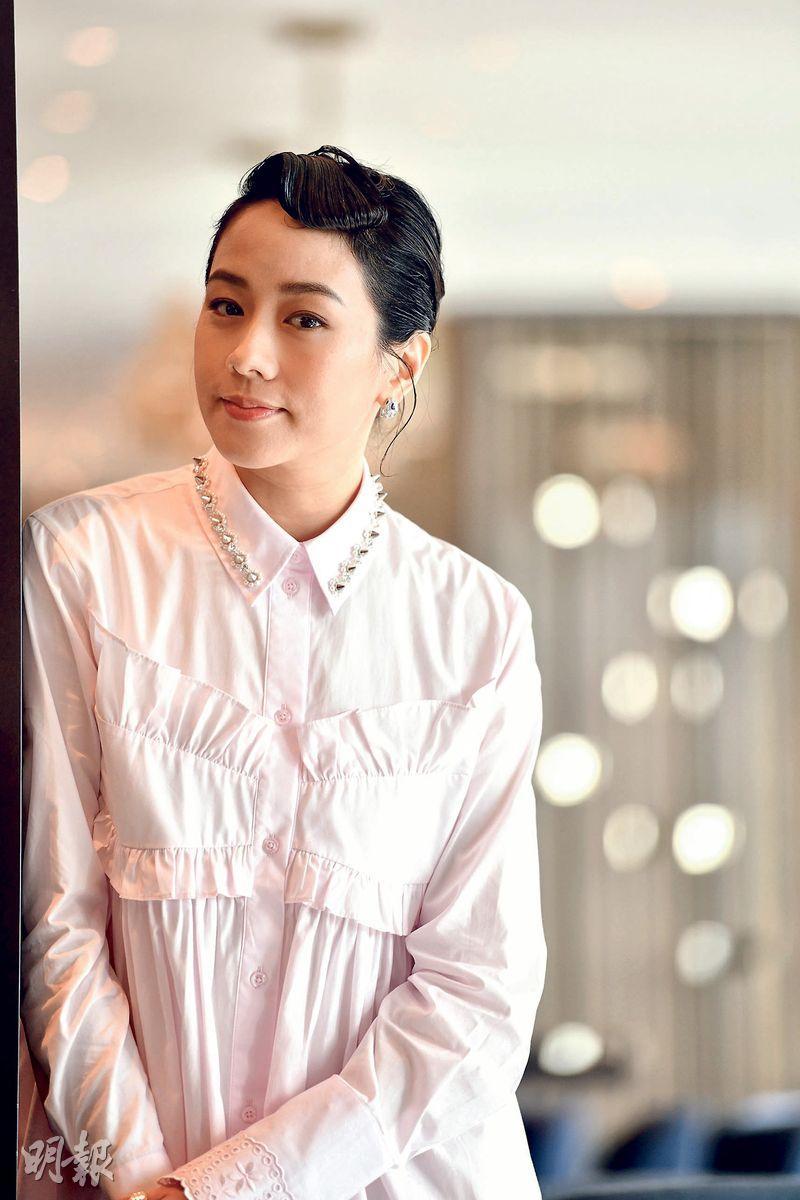 Karena Lam Ka Yun in the new film LEGALLY DECLARED DEAD (SEI YUN MO HOR YI) with Best Actor Anthony Wong Chau Sun and director and her husband Steve Yuen Kim Wai formed an iron triangle team. Many friends worried that Chau Sun would yell at her, but she said that Chau Sun was not mean. He was as kind and cute as a teddy bear. Instead she was more afraid of the director because she had to face him all day. She had to how far she could go to keep the relationship fresh.

Lam Ka Yun in LEGALLY DECLARED DEAD played a middle age woman with physical deformity, Shum Chi Ling. She controlled her husband Wong Chau Sun to commit insurance fraud, but in real life she was not a "control freak". "I don't like to be controlled, why would I control others? I feel even when living together with my husband, daughters as a family of four, everyone needs to have time to be individuals."

Ka Yun and Chau Sun worked together again 4 years after HEAVEN IN THE DARK (UM SIK TIN TONG). Ka Yun praised Chau Sun's god class acting for bringing her into her character; off camera they also had a lot to talk about because they had the same drama teacher. She said that last time Chau Sun played a prosecutor and tormented her, this time Chau Sun was at her mercy instead. She thought it was a lot of fun. "Chau Sun very rarely plays a weakling, usually he is very manly; however Chau Sun is like a teddy bear, very cute, very kind." Although many people felt that Chau Sun looked mean and hard to get along with, Ka Yun did not have this impression; however when a friend heard that she would be working with Chau Sun, she was told to be careful as Chau Sun constantly yelled at people. "He didn't treat me like this. I feel he picks people to pick up. He sees how seriously I do my homework, he wouldn't bust my chops. I believe if I didn't do my homework, know my lines, miss my marks, I would go into hell. Instead I am more afraid of the director more than Chau Sun, because at home I still have to face him!"

LEGALLY DECLARED DEAD would also be the second time she worked with her husband and director Yuen Kim Wai. Many disliked working as a couple as they would be afraid that arguments would hurt the relationship. However Ka Yun was not worried because they were too passionate about film and drama. Work and life were often mixed into one. At the same time she very clearly understood that for a movie the director was the soul. Whether the director was her husband and someone else, she needed to follow the director. If she had any opinion or question she would bring it up for discussing before the production began; during the shoot, she would be silent and follow the directions. Thus she never had any argument at all. Ka Yun left the outside with the image of good mama, good wife and good woman, the director hoped to help her with breaking through the frame through this film and show no trace of "Lam Ka Yun" to the audience.

As for their daughters' education, she admitted that they argued and had differences of opinions. "Usually our method of disciplining children is very uniform, we wouldn't be a bad cop and a good cop; yet under the pandemic, children do their homework online and need a parent to be with them. I would be particularly frustrated. Why do I have to be bad and he enjoys all the benefits?"

Ka Yun and her husband have been married for 10 years. Their love has only grown but actually they also have friction, which she though was very normal. "Friction is due to understanding each other. My family culture is very democratic and can permit everyone to have different opinions; my younger daughter is 7, I would tell her that if she feels Mommy does something wrong she has the right to tell her. However she would have to remain calm and they could talk about it. We constantly had family meetings, talk openly, we wouldn't let any problems go overnight."

Ka Yun felt that since starting her family, she grew more patient and listened more attentively. "I used to come to a conclusion very quickly, without seriously listening to everything that my daughters tell me. My Mommy agrees with me, 'Why do you permit children to have opinions?' Because the older generation feels that they are right, they should first 'threaten' and scare the children first; the times have changes, the discipline method is different. In the future children would learn how to use the mobile phone, Google would become their parents as they find the answer they want online. As the times change you have to change with them; I want them to build a self identity the most, to think independently. Everything has two sides, and they should look at everything from both angles then build their own views. This is very important, especially now when social media can very easily trigger people's emotions. You can very easily fall into it. You have to analyze and take a step back to look at the whole situation."
Posted by hktopten at 5:40 PM