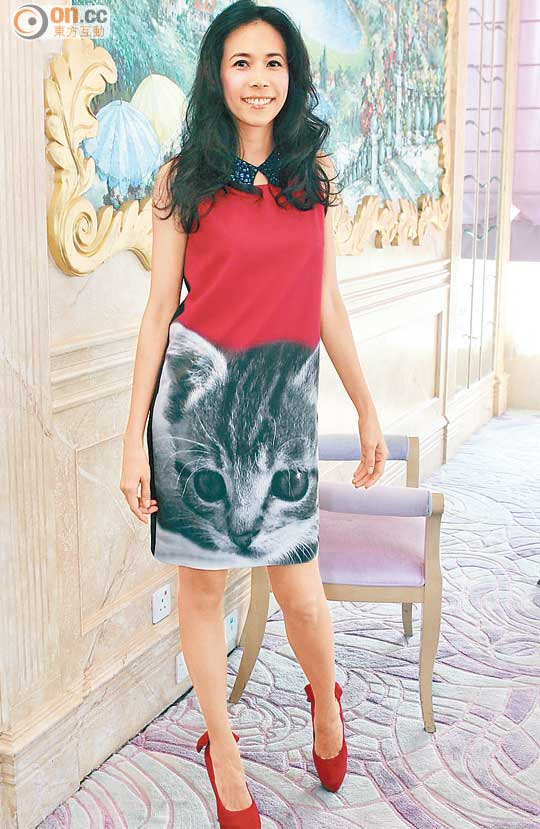 Karen Mok Man Wai's THE AGE OF MOKNIFICENCE - KAREN MOK 20TH ANNIVERSARY EXHIBITION will take place between September 15 and 21 and relive her 20 year career with everyone. Among the several dozen items on display, some you could see and some you could listen to like awards, singing recording from age 3, the false teeth from the film GOD OF COOKERY (SIK SUN), the special reprint of FULL BODY KAREN MOK album cover for this exhibition. The most special was the secondary school school newspaper with Jacky Cheung Hok Yau and Alan Tam Wing Lun. Karen said, "Because a classmate was Hok Yau's nucleus fan, I asked him for an interview. In the end we successfully applied for Hok Yau and Principle to take a photo while holding the school paper. I already forgot about it long ago, forgot that my destiny with Hok Yau already started in school."

Karen recalled in 1994 a director asked her to dye her hair red for Cheung Hok Yau's music video MOON GAZING (MONG YUET). Later because of the red hair she caught Wong Kar Wai's eyes for his film FALLEN ANGELS (DOR LOK TIN SI). Finally because of that performance she won Best Supporting Actress. She said, "So for my Best Supporting Actress award I actually had to thank Hok Yau. Later because I dyed my hair again my hair quality turned bad, so I shaved my head. In 2003 I won the Taiwan Golden Melody female singer award, Hok Yau presented the award to me; thus, I really hope to invite him to attend the exhibition opening ceremony."

Was she reminded of many memory when she picked out the displays? Karen admitted that old memory was definite, but the process was happy. Did the exhibit include a photo with Stephen Chow Sing Chi? She said, "Does it have his photo? Haha, it does have CHINESE ODYSSEY photos." What about Stephen Fung Tak Lun related items? Karen said, "Those aren't for display! However I can invite him!" Will she invite Chow Sing Chi? She avoided the question and only said that the exhibition would run for a week, anyone could go at any time. Karen revealed that her husband would show his suppose, as sh would show him everything of hers in these 20 years. She sweetly said, "Aside from fulfilling my dream in my career, my life also has reached its dream. Marrying a good husband is a happy thing. The exhibition would display some wedding related items." Would her husband be jealous about her past with Chow Sing Chi? She joked, "That's why I didn't tell him, anyway it's already ancient history!"
Posted by hktopten at 1:55 PM