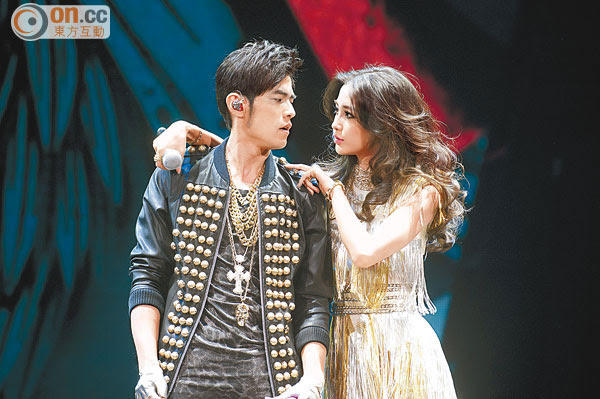 Chow Kit Lun in one scene was being bullied. He in not so fluent Cantonese invited 5 Wise Guys to help. Cheng Yi Kin, Chin Kar Lok, Chan Siu Chun, Lamb Hiu Fung and Tse Tin Wa immediately appeared. Chin Kar Lok, "We are just as powerful here, we don't know who would win without fighting!" Cheers arose as everyone pretended to retaliate and struck back at the bad guys. "Boss" Chow Kit Lun praised, "As soon as you appear they got scared off, amazing!" Cheng Yi Kin tried to collect a debt from Chow Kit Lun, saying that 10 years ago he promised to write a song for him but he still has not received it yet. Lam Hiu Fung and Chin Kar Lok took the chance to invite Chow Kit Lun to be their concert guest. "From the 7th to the 10th we will perform concerts here, maybe even on the 11th, we hope you can come to the Hong Kong Coliseum to return (the favor) to us!" Chow Kit Lun immediately changed the subject and asked Chin Kar Lok that he was an action director before, since he could fight could he sing? Lam Hiu Fung again asked Chow Kit Lun, "Will you come to sing again?" Chow Kit Lun still avoided the question and only said, "Let's try and see if we have chemistry and how we sing!"

They performed FRIENDSHIP AGE, during which Chow Kit Lun got close to fans and a crazed female fan tried to pull off his pants. He immediately retreated. During encore, Angelababy performed NINJA with Chow Kit Lun and made physical contact as they sang. Chow Kit Lun said, "She said that she has been listening to my songs since she was little!" Baby said, "Yes, at the time I was still a student. I started listening since your first record." Chow Kit Lun helplessly said, "It doesn't feel good at all! I finally understand the feeling that the guests I invited have. Last night the Grasshoppers were guests and I also said that I have listened to their songs since I was little. Today I finally experience it." After the show, Baby excitedly said, "I have liked Chow Kit Lun for 13 years, I know all of his songs. Working with my idol for the firs time on the stage felt like a dream com true. At first I was very nervous, but after I got on stag I was very happy and enjoyed this feeling very much."
Posted by hktopten at 4:39 PM