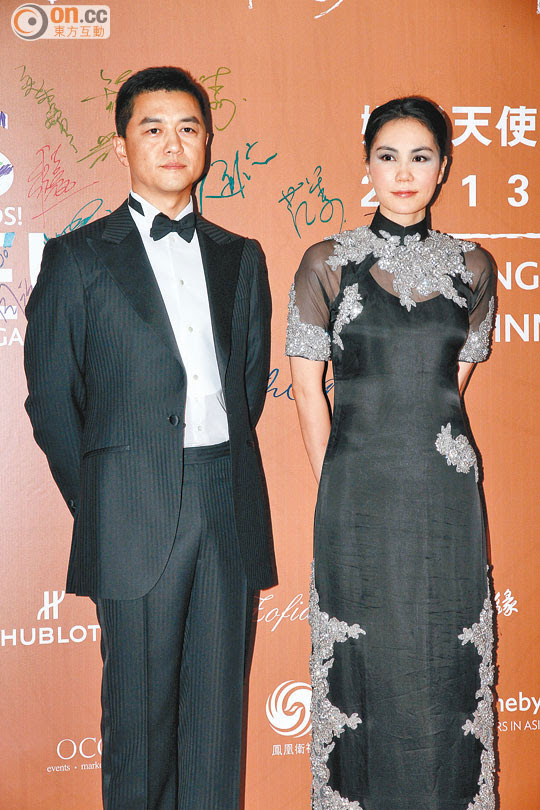 "In this lifetime, our fate as a couple ends here. I am great, you take care too." Faye Wong in a few simple words ended her 8 year long marriage with Li Yapeng. The relationship was not looked upon favorably once. After they got over the seven year itch many thought that they would make it, but they were unable to get over their personality difference. Even though they did not have any major argument, their personalities were polarized. They had no way to be together anymore and chose to divorce. Yesterday on Friday the 13th they announced their divorce and truly shocked everyone. They even returned to Urumqi where they wed for the divorce processing. The custody of their daughter Li Yan will go to Li Yapeng.

Last night around 7:30PM, Faye Wong suddenly posted online, "In this lifetime, our fate as a couple ends here. I am great, you take care too." and a smile to end her 8 year long second marriage. In the matter of seconds over 10,000 people left messages and forwarded the post. They even hoped that it was a hacker "invasion" due to Friday the 13th.

However the news was rapidly confirmed. Li Yapeng also confirmed the "divorce news" online. He issued a statement. "I want a family, but you are destined to be a legend. I will miss all the beautiful times of in the past 10 years. I love you like I did in the beginning, which is very regrettable. Letting go is the only thing that I can do for you. I hope now you are happy, my high school girl. In addition in order to avoid everyone's speculation, here is an announcement for all our caring friends: 1. our daughter Li Yan from now on will live with me, we ask everyone for their assistance. 2. Our finances from falling in love to marriage have always been independent, so we have no finance division issues. I wish everyone well. Tomorrow the sun will still rise!"

Li Yapeng seemed to want to marry a Faye Wong who could be a housewife. Unfortunately Faye Wong was a superstar wherever she went, an eye catching legend. It was not hard to understand that for the chauvinist Li Yapeng, becoming the "weaker man to a stronger woman" was hard to take. Actually because Faye Wong did not like to argue or discuss but Li Yang was more direct and impulsive, they lacked communication more and more. In particular earlier this year, he even stated that he hoped Faye Wong would have a son for him, but Faye never heard a word of that. Obviously it was a test from Li Yapeng.

Even in May, "Faye Peng" came to Hong Kong for the Smile Angel Foundation event, when they posed for photos Faye Wong obviously did not smile and they even had a gap between them. As Li Yapeng was trying to pull her closer, she shook him off and Li Yapeng flashed an awkward smile. On the other hand Faye Wong and Carina Lau Ka Ling were talking, laughing and messing around when they posed for photos. At the time the couple was already in a cold war stage. This was also the final time that the couple attended a public event together. According to friends, Faye Wong and Li Yapeng's marriage was just in name only a year ago. She kept an open mind and turned to floor level of their home into a temple. She spent last August practicing in Tibet, her forehead was all bruised from kowtowing.

During their 8th anniversary in July they did not post any loving photo as they did in the past. Then on Faye Wong's birthday in August, Li Yapeng tried hard to save the marriage, but Faye Wong chose to practice Buddhism on a pilgrimage. Finally Li Yapeng brought up divorce, they had a sensible discussion and separated amicably. They even went to Urumqi, Xinjiang where they wed for the divorce process; yesterday a Mainland site published a photo of them in the midst of the process and they both appeared at peace. The 44 year old Faye Wong's 2 marriages both ended with a signature as her destiny with the 41 year old Li Yapeng ended.

Currently in the U.S. her older daughter Dou Ching Tung seemed to know her mother and step father's decision already. Earlier she even posted, "I can't sleep". Understandably the 16 year old Tung Tung had to face two of her mother's divorce and would been just as bad as her mother. Nicholas Tse Ting Fung who was linked to Faye Wong once yesterday at a Mainland program taping was asked about Faye Wong's divorce. He only looked displeased and did not respond. Faye Wong's manager Chan Ka Ying replied, "I don't know the detail of personal matters, but the break up was amicable." Vicki Zhao Wei yesterday wished Faye Wong well, "Angels will be happy." and posted a photo of Faye Wong in mischief.

The Smile Angel Foundation, which they founded together, yesterday also issued a statement. "Today we respect Mr. Li Yapeng and Ms. Faye Wong's choice of their own tracks in life. The Smile Angel Foundation operation as the operation of love of theirs and thousands of caring people will not rest or cease. We will work even harder for the future of the children of China. The Smile Angel spirit will always encourage us to march on!" Seemingly their divorce decision has already arranged for everything.
Posted by hktopten at 1:50 PM