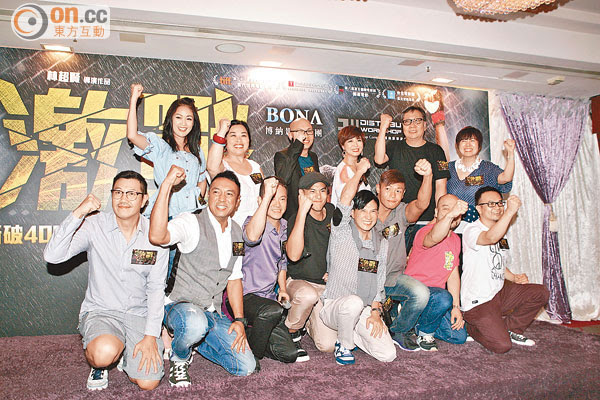 The film UNBEATABLE (GIK JIN) after 32 days has already accumulated HK$ 41 million box office. Two nights ago a second celebration was held. Director Dante Lam Chiu Yin, Nick Cheung Ka Fai and Eddie Peng Yu-Yen and other actors attended. Peng Yu-Yen who was not fluent in Cantonese said, "Very happy!" but made it sound like foul language; whn Ka Fai asked him whether he would support Taiwan and Hong Kong films, Peng Yu-Yen did not support his own people. "If it can break the YOU ARE THE APPLE OF MY EYE record, I can do whatever (people want)!" Speaking of the sequel, Lo Mik Shuet offered to perform. Lam Chiu Yin joked that he would add a scene in which Ka Fai "unlocks" her, which could bring in HK$ 3 million. Ka Fai joked, "Everything will happen on the bed." After the toast, Ka Fai and Peng Yu-Yen even reprised their kiss scene in the film. Although they just pretended they left people not knowing whether to laugh or to cry.

Ka Fai said that he and Peng Yu-Yen were busy on their own. Two nights ago they finally made time to celebrate together. Ka Fai said that he was very happy his first fighting film already received HK$ 41 million box office performance. "I have been making movies for over 20 years, this is the first time that I reach this record. Peng Yu-Yen should be happier, since he just made a few films." Ka Fai revealed that the likelihood for a sequel was very high, but the story might not be about fighting. Peng Yu-Yen said that he was very honored, it was like a dream. He was happy that the Hong Kong audience accepted it and hoped to have even more opportunities to make movies in Hong Kong.

Did he want the film to defeat APPLE at the box office? Ka Fai said, "Of course I do, I want to get rich too! APPLE performed so well, our trend now may not be able to break it, but we don't have to break someone else's. This time with such word of mouth and box office I have already broken through myself. I am very satisfied." Ka Fai said that he admired Peng Yu-Yen very much and privately he already treated him like a disciple. "If he has any question, I am willing to have exchanges and share with him." Some said that Peng Yu-Yen's foul language improved a lot. He immediately played dumb and said no. Ka Fai chimed in, "Don't X pretend!" Peng Yu-Yen said, "I learned it from Master."

Joey Yung Cho Yi who will soon perform her concerts wanted to train to be as muscular as Ka Fai. Ka Fai stated, "She doesn't need to, the poster is already so hot. She can rival my previous cover, with red lips and not much clothes. Being pretty like this is good, don't mess around with other stuff. With muscles viewers will want a refund."

As for Bobby Auyeung Chun Wai revealing that he had to swear not to kiss Esther Kwan Wing Ho in order for her husband Ka Fai to permit her to make a series. Ka Fai said, "This vicious oath isn't just sworn now, I hope she doesn't need to make kiss scenes. I can make more. In recent years I have always been fighting people and haven't had much romantic scenes. The Old Lady might as well stick with ARMED REACTION (TOR CHEUNG SI JEH), fire a gun and that's it."
Posted by hktopten at 10:01 PM