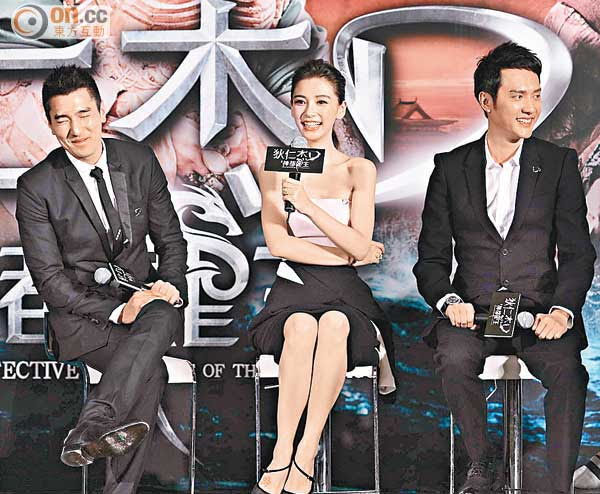 As for her favorite guy in the film, Lau Ka Ling said, "I like every one of them, as long as they can investigate the case for him then they are fine." Baby joked, "Then let them take shifts! Monday, Wednesday, and Friday go to Di Renjie, Tuesday, Thursday and Saturday go to Yuchi Zhenjin." Lau Ka Ling praised Baby's pretty costumes and her high ability to comprehend. Feng Shaofeng revealed that in a dance scene appearance, Baby's leg was locked onto a high parade float and immobile. After the shoot she could not walk at all and thus was made fun of. Baby joked, "Tsui Hark's women aren't easy to play, the female characters in the film are all very beautiful and have many emotional scenes. The director's standards are very high, actors need to prepare alot more."
Posted by hktopten at 1:57 PM