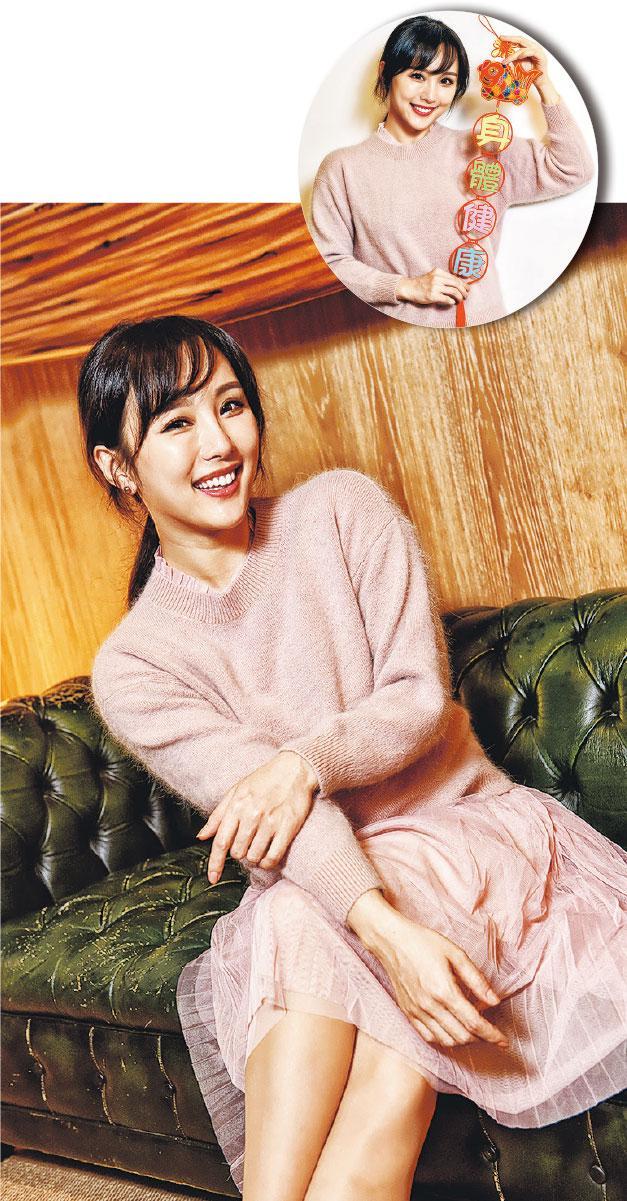 During the Lunar New Year, Dada Chan Jing displayed peach blossoms at home to promote her luck with people. She even personally made turnip cakes to give to elders and friends; her mother was from Shanghai, in past years she would visit family in Shanghai with her. This year because of her Lunar New Year film MISSBEHAVIOR she had to stay in Hong Kong and promote. Back then when Dada won the Hong Kong Film Award Best Supporting Actress with VULGARIA (DAI JOOK HEI KET) she suddenly announced her retirement. She denied that she had relationship problems and said that back then she had a passing in her family, Meniere's disease made her dizzy constantly, and so much has happened that she could not accept everything at once. She chose to escape. Having been hurt in love Dada admitted that entering a new one would not be easy, so right now career would come first. Dada once suffered from ear ailment, so she wished for good health in the Year of the Pig. Career wise she would like to make more good characters. She would not mind being sexy but the role would also have to have potential. She admitted that for awhile she resisted being sexy again, but the more she limited herself, the more limited she was. With all the restrictions her performance was less than natural, she almost lost many performance opportunities. Later she thought it through and without any stress her performance was even more in control. "Pang Ho Cheung also said that my performance was more relaxed, in some scenes he was surprised that I was able to be so open."

Dada in MISBEHAVIOR played a literary youth writer, in order to write a book she used every trick -- even selling out her friends' secrets. The real her was drastically different. DaDa said that she was a great secret keeper. She said, "I don't have any secret, I tell everyone everything. However I am tight lipped about anything about my friends, so friends love to talk to me. I can keep secrets and give suggestions. I am more sensible, friends like to talk to me about their relationships."

As for her own relationship problems, Dada pointed tout that past unpleasant experience made her grow up and become more sensible. She said, "If I would date again I would have to publicize it, so everyone would share this joy with me. If I can't publicize my other half, this relationship is not real enough. However because I am too sensible and protective of myself, I don't want to repeat my mistake. So it is very hard to love someone. Hence, now I choose work. After I do well at work I would then talk about a relationship."

Dada has seen too many failed romantic experience around her. Building her own financial foundation first would be the most important. She said, "With your own career and money, you can do whatever you want. When you look for someone you wouldn't have to see if he have any financial ability."

Although Dada's love life is blank, she said that she was not lonely because work, family and friends have already filled her life.

After winning Best Supporting Actress with VULGARIA (DAI JOOK HEI KET) she suddenly announced her retirement, after over two months she also announced her return. Some said that it was because of a relationship? Dada denied that and said that at the time because she had a passing in the family, her body set off an alarm as she constantly got dizzy. Everything in life suddenly all came at her at once. She also has never reached such height in her career and did not know how to handle it. At the moment she could not take it and choose to avoid it.

Did she ever regret her impulsive behavior? She said, "Now I am happy, full of hope in the future. (Do you regret that you didn't properly grasp the award moment and bring your career to even higher height?) I don't, instead I feel now is the best time. I didn't have much life experience before, now I do. I also have traveled to many places, learned a lot of new information, so I am more confident in handling characters. If I had to play these characters before, I definitely wouldn't be able to drive them and would only waste the opportunities. I know that I was wrong before, I was stubborn, but I feel instead of looking back at the past I can improve on the present."

Although she has not set any goal, she would do her own thing before opportunity would strike. Following her heart instead was the happiest and the most comfortable.

Turning 30 soon Dada was not afraid of becoming old. Instead she looked forward to age 30. She said, "Youth has the beauty of youth, but as women grow older they become more flavorful and know what they want."

She was pleased with her performance last year. She made 3 movies and went to many places. She said that this year she would have to stay in Hong Kong to work and improve her health, because earlier she had Meniere's disease she rested for a rather long time. This year she hoped to be able ot make different types of movies and try characters that she has not tried before, like the disabled, business woman and professional.
Posted by hktopten at 6:04 AM