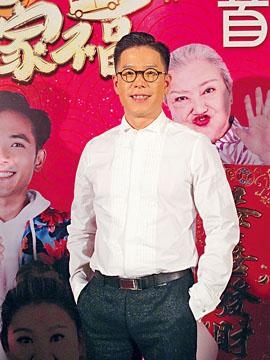 Jerry Lamb Hiu Fung two nights ago attended the Lunar New Year film A JOURNEY OF HAPPINESS (WAN JUEN CHUEN GA FOOK) premiere. Ah Lo said that the film shot in Malaysia for over a month. Everyday they had to visit different locations, just like the holiday tour in the film. In the film he played a real estate agent. He had an open house scene and realized that no one lived in the development. He said, "I asked the locals and they said that no one lived there because it was very small. However it had a high ceiling and over 600 square foot balcony. It was only 2 million!"

Alex Lam Tak Shun two nights ago attended the Lunar New Year film A JOURNEY OF HAPPINESS (WAN JUEN CHUEN GA FOOK) premiere and praised how attentive the team was . During the shoot they had sunny days, so he wanted to sunbathe while waiting for his turn. He said, "However the sun was very strong. The team had someone holding umbrellas to block the sun for everyone. They worried that I would get too tan and ruin continuity of the shoot. I want to sunbathe, they wouldn't let me, so I ran around back and forth!"

He also revealed that his co-star Lo Hoi Pang really liked durian. One day the team filled a table with durian and Brother Pang was very happy, with durian in one hand and a cigarette on the other. Susan Shaw Yam Yam said that Brother Pang really liked that film, wherever they wen he told her to smoke. Now she has been scared off smoking.
Posted by hktopten at 2:21 PM