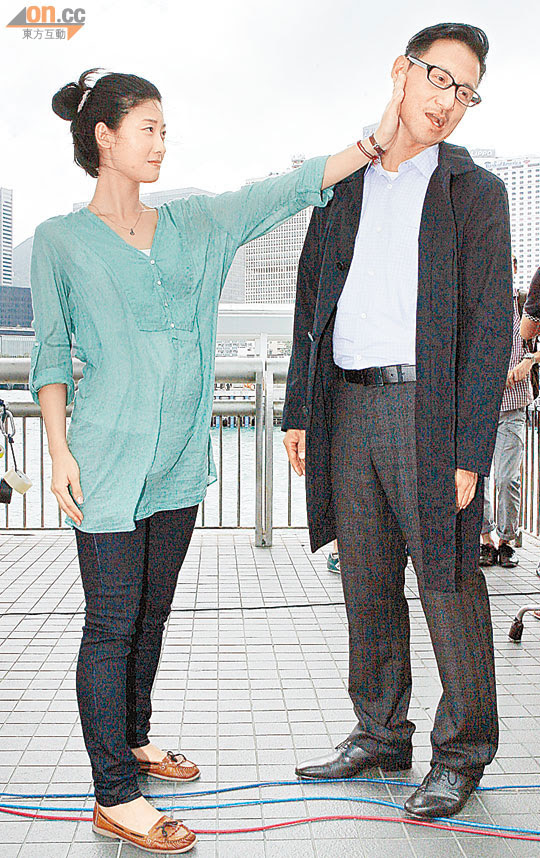 Jacky Cheung Hok Yau, Taiwan actress Chu Chih-Ying, producer Johnnie To Kei Fung and director Shu Kei yesterday attended the film YUT GOR FUK JAP GOO SI (A COMPLICATED STORY) production start ceremony. Hok Yau worked on a slap scene with a "pregnant" Chu Chih-Ying. Luckily Hok Yau was only slapped for two takes. Hok Yau said, this time he was only guest starring. Why did he take the role? He said that director Shu Kei asked him. Because back then he gave him his start in the film industry, he agreed right away. This time he even worked for free.

Was Hok Yau not making other movies? He said, "Don't say that, don't drive me away." As for the national education response, Hok Yau said, "At First I didn't know about the national and moral education courses, so I neither agreed nor disagreed. Now I feel we should sit down and talk about it. If we can't talk in there, we can talk out here. It doesn't mind, don't make it so tough on everyone." When asked whether because his daughter went to an international school he was not too worried? He said that his daughter lately has been singing the national anthem at school or other nation's songs. He felt that people should be patriotic. "If education takes an objective approach, it has no problem."

In addition, speaking of TVB's intention of working with other media outlets on a music award show that will have one vote per person for the male and female singer categories, Hok Yau said that a general election might become a fan competition. When a song was well sung but unpopular it was still useless. Hok Yau a long time ago already suggested unifying the music award shows. Yesterday he still said, "A joint award has no problem but needs to be representative. Like the U.S. has many music award shows, but one or two were more representative." TVB seemed to have taken the first step. He admitted that someone speaking up was better than no one, the rules could be set again. Chu Chih-Ying said that she was very nervous when she just slapped Hok Yau. Her hand was shaking. Hok Yau was her idol and she has always admired him.

To Kei Fung who was much thinner said that he has already losing weight for a few weeks. He said, "Wa Jai (Andy Lau) gave me a weight loss diet. I had to quit carbohydrate and only ate meat, the goal was to lost over ten pounds." To Kei Fung was like a teacher and a friend to Sammi Cheng Sau Man. Has he received Sammi's wedding invitation? He said, "You ask her." Would he finish THE BLIND DETECTIVE (MAN TAM) earlier so Sammi would have time to wed? He said, "If she wants to, I wouldn't stop her. Wait until the movie is finished then she can." Will he try to finish BLIND as soon as possible? He joked, as fast as he was able to.

To Kei Fung said that marriage was between two people. Even parents could not force it. Yet Sammi was a woman and needed a companion. Would Sammi after BLIND wed around October? To Kei Fung said that he did not know. Would he prepare a gift? He said, "Too soon, if it's ten years later, the gift would be rotten."
Posted by hktopten at 4:00 PM