[2012.09.22] RAYMOND LAM AND KARENA NG HAVE NO EXCHANGE DURING PHOTO OPPORTUNITY 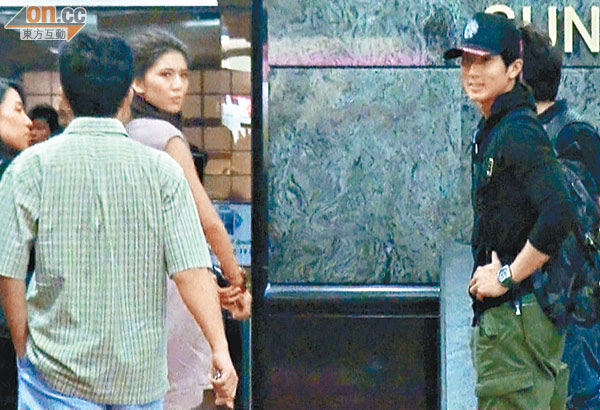 Ronald Cheng Chung Kei, Raymond Lam Fung, Teresa Mo Shun Kwan, Lynn Xiong (Hung Doi Lam) and Karena Lam Chin Yu, director Vincent Kok Tak Siu and boss Raymond Wong Pak Ming two nights ago attended the LOVE IS PYJAMAS (NAM YUN YU YI FOK) premiere. Cheng Chung Kei's wife Sammie Yu Sze Man, Kok Tak Siu's girlfriend KiKi Lin (Lam Chi Huen), Eric Tsang Chi Wai, Kenny Bee (Chung Chun To) and Wu Chun attended. Lam Fung and Ng Chin Yu were linked in rumors. Two nights ago they were asked to pose for photos together. Lam Fung graciously stepped up, but after the photo opportunity he left in a hurry and said that he had to do interviews. Then the cast shared their experience on the stage. Lam Fung and Ng Chin Yu had rather little exchange and seemed to be avoiding each other. Lam Fung said that he was not afraid to share the stage with Ng Chin Yu, because earlier they just worked together on a movie. He said that he was not afraid that his fans would not like that because in the past he treated all rumors with female artists as promotion. Fan would not mind. Thus he did not need to deliberately avoid her.

Cheng Chung Kei two nights ago appeared with his wife. He said that their daughter was already asleep at home. How was his good friend Cheung Tat Ming's health? He said, "OK, last week we had dinner together he was fine. His appetite was great, he had curry and Wagyu beef. He was considered fully recovered, currently he was in detoxification rest period. All the chemo-therapy was already done." He said that Tat Ming's job has not been affected much. He and Vincent Kok Tak Siu also planned to make DRAGON LOADED 3 (LUNG GUM WAI 3) and saved a part for Tat Ming. Cheng Chung Kei also said that Tat Ming was in a decent mood and still came up with rotten gags. Two nights ago he informed him about the premiere, Tat Ming sent a text message to wish him a successful premiere.

Lynn Xiong (Hung Doi Lam) was asked if she invited Aaron Kwok Fu Sing. She said that probably not to the premiere. She said that she would ask Sing Sing for his opinion. She too would enjoy the Sing Sing starred COLD WAR (HONG JIN). Although they were in competition, she hoped that they would watch both movies.
Posted by hktopten at 7:05 PM