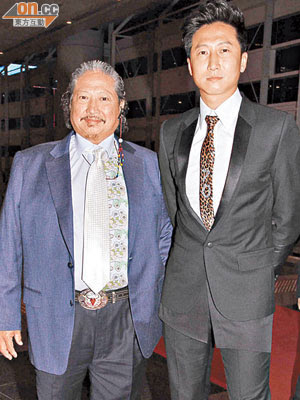 Just returning from Hengdian, Lau Ka Ling admitted that she has heard on the radio about her husband being criticized online for taking a Japanese film 1905. Yet as far as she knew the film approached Wai Jai as early as 2009, but he did not have any room in his schedule. Now with the tension between China and Japan, the project would probably be postponed indefinitely. Was being an actor very helpless? Ka Ling said, "We have to have the patriotic spirit, we have to. We have to stand firm on the issue, have to fight to the end. However people should also help each other, love each other and live in harmony." She also said that she has been working in Hengdian everyday and did not pay attention to the Diaoyu Island news. In addition she was working on a costume series and had to return to the Tang Dynasty, she felt the anti Japan sentiment even less. Ka Ling iterated again that Wai Jai probably would not take the Japanese film role because THE GRANDMASTER (YUT DOI JUNG SI) was still in production. Did she know that Wai Jai has been called a traitor? She said, "That serious? (They even demanded an apology from Wai Jai online?) Then you should talk about it. I understand people of each age have different ability to accept. They should use intelligence to resolve the issue. However patriotism is a must, the sovereignty must be regained." Wai Jai's management company Jet Tone said that the Japanese film has begun negotiation with Wai Jai since 2009 but did not have a script. Thus so far Wai Jai still has not signed a contract with the film company.
Posted by hktopten at 3:13 PM