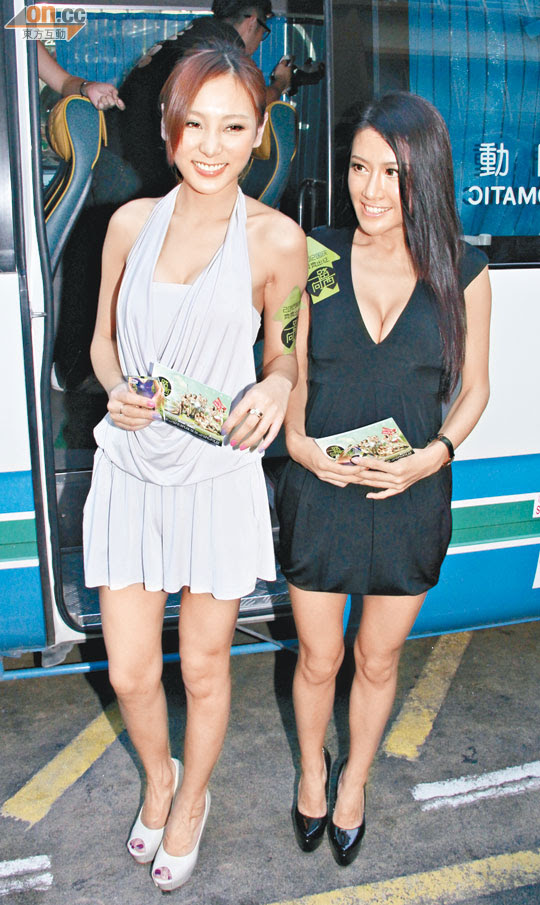 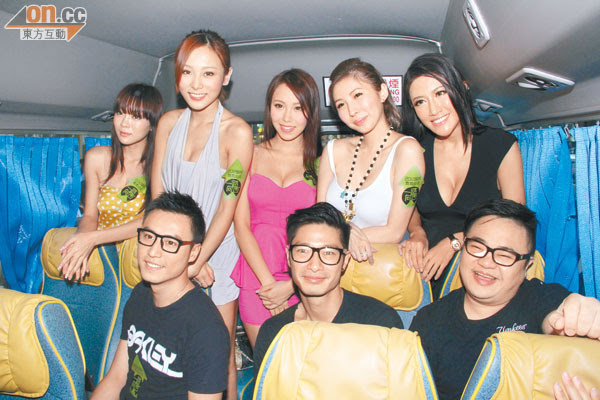 Jeana Ho Pui Yu, Angelina Zhang (Cheung Woon Nga) and Celia Kwok Wing Yi yesterday along with Justin Cheung Kin Sing and director Mark Wu Yiu Fai promoted their film DUE WEST OUR SEX JOURNEY in Mongkok. Before the event began many photographers and onlookers were already present. TO avoid any chaos, the interview location was changed to on a bus. Yet photographers still surrounded the vehicle for photos. Finally the event was forced to be cancelled. Due to the numerous photographers taking photos on the street, the police came for an understanding.

Jeana said that the film's advanced screening received enthusiastic response, thus the cast celebrated with a parade in Mongkok and gave away postcards, condoms and memo pads. Jeana said that 10 security guards were present. She believed Hong Kong to be a lawful place and thus was not worried about being taken advantage of in the crowd. "I am just afraid that we don't get enough people!"

Jeana boasted that the film would be able to reach 67 million at the box office and surpass the current Hong Kong film box office champion VULGARIA (DAI JOOK HEI KET). "This year isn't over yet, and the kids now have to go to school. Parents can do their own thing." Jeana and the cast even stated that if the film reached 67 million they would skinny dip to celebrate. Jeana dressed sexier than she has been lately. She said that she already has her boyfriend Parkman Cheung's approval. Did she show off her chest in retaliation of the recent reports that she was not as sexier as Cheung Woon Nga? She said, "Do you feel this is showing off my chest? No way!"

When asked to grade what Jeana was wearing, Cheung Woon Nga actually talked about the national education opposition as a Mainlander. although some film promotional personnel asked her to keep quiet, she could not care less. "Everyone today should care about something meaningful. I don't know if actors like us are qualified to discuss national education. Luckily I am able to work and live in Hong Kong from the Mainland. I don't want Hong Kong to lose its freedom and democracy after 10 or so years." Her comment made Jeana drop her microphone, which Jeana covered up with the vehicle was very rocky.
Posted by hktopten at 3:21 PM