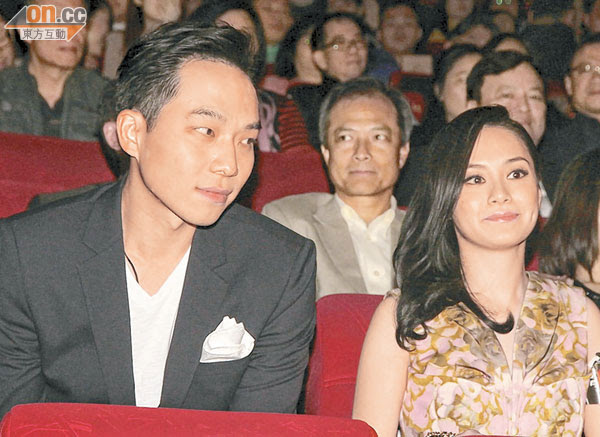 Ah Gil said that because her boyfriend liked Chinese kung fu he came to support the film; Ah Gil also revealed that her boyfriend often boasted that he was more agile than her. However when she asked him to learn Latin dance together he declined. Ah Gil said, "I am afraid that dancing with someone I don't know would be very embarrassing, but he said that he wasn't interested and was very busy."

Wong Chau Sun was linked in rumors with his on screen mistress Zhou Chuchu. He supposedly took great care of Chuchu and earlier dragged her to the Hong Kong International Film Festival opening ceremony red carpet. Chau Sun two nights ago joked about the rumor, "I don't have any mistress up there, I do down there. After I die I will. I have neither the money nor the time!" He was displeased that his family life was disturbed, saying that when his wife and son went out earlier the media flocked to them but did not identify themselves. Chau Sun said, "My wife ignored them. With so many swindlers now, I told my wife to call the cops next time."

Chau Sun felt that taking care of co-stars was being professional for an actor. He asked, "Since Yuen Wing Yi wasn't there, was there any problem that I asked Chuchu to walk the red carpet together? You may the normal sound abnormal, making all actors like crooks and prostitutes and are all bad. Do every co-stars have to go to bed?" Chau Sun was accused of not inviting fellow Ip Man actors Tony Leung Chiu Wai, Donnie Yen Chi Tan and Chapman To Man Jat who was rumored to be in a dispute with him. He said that the boss was responsible for the guest list. Would he invite To Man Jat to watch the movie and learn about acting? Chau Sun said, "Everyone can watch, do you believe he doesn't know how to act?" With his ATV background Chau Sun was asked about the survey that more than 50% were those surveyed were upset with ATV. He admitted that he changed the channel and stopped watching ATV. He said, "It scared people to death, I have seen hosts and doctors on an interview. They spoke Mandarin like they were clowns, what for!"

Siu Chun and Cherrie Ying Choi Yi's child will be born in July. He was very happy to be the father of a son and looked forward to taking him skiing. Now he had to take care of his wife so he would only choose to work in places that were closer to Hong Kong. He has not thought about going into the delivery room and cutting the umbilical cord, but he has read books about parenting. He joked, "I can stay home and be a house husband, my husband can go out and work. It's great to be a kept man!"
Posted by hktopten at 3:24 PM