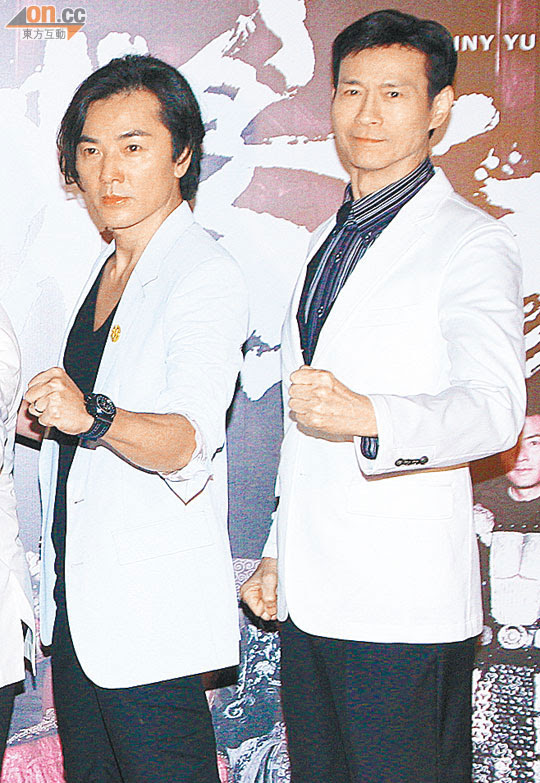 SAVING GENERAL YANG's actors yesterday under the leadership of director Ronny Yu Yun Tai attended the film premiere at the Tsim Sha Tsui Cultural Center. They put on white suits and looked handsome, attracting many fans to show their support. Chau Guoon and Lam Fung had the best fans, both sides screamed in an attempt to try to drown out the other side's voices. Finally Chau Guoon's housewife fans crushed the "Fung fans" and successfully won a battle for their idol. Speaking of being more popular than Lam Fung, Chau Guoon joked, "Really? Maybe Lam Fung doesn't know to buy throat drops for fans. I will make it up to them later. Actually I am very happy to be with a big group of younger guys."

He admitted that the shoot was very tough, as he had to ride a real horse for the shoot and wield a Guan blade as a weapon. He could only tightly wrapped his legs around the saddle. Which "son" was able to success his heroics? Chau Guoon said, "The men have different styles, but my daughter really likes Jai Jai. Originally I planned to bring her to the premiere, but finally I didn't have a chance to bring her to see her idol. I can only wait for the next time. (Jai Jai has a girlfriend.) That's no big deal, fans should love idols, and idols should cherish their fans."

Lam Fung, Ekin and Jai Jai also graciously invited their other halves to watch the film. Lam Fung learned from reporters about Karena Ng Chin Yu's show booking in support. He could not help but sweetly smiled and said, "She of course has to support it, but I may not be able to watch it with her because later I have to return to the Mainland for a series. Everyone were busy with their work. If we have time we would have dinner in Hong Kong." Ekin would invite his wife Yoyo Mung Ka Wai to watch the movie together. Reportedly his mother particularly spoils Yoyo, which Ekin admitted. Wu Chun praised how strong Ekin's waist was. In the film he was able to avoid the danger of falling off a horse. Jai Jai continued to avoid talking about his romance and only clarified that he was not living with his girlfriend Reen Yu. Reporters suggested for his girlfriend not to appear on the balcony again to avoid any misunderstanding. He joked, "Thank you everyone for the reminder. We are not sneaking around, we are out in the open."
Posted by hktopten at 2:23 PM