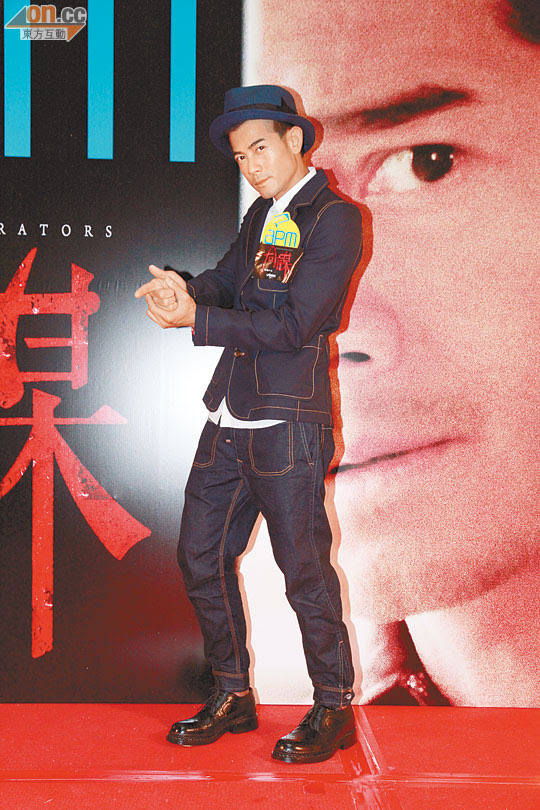 Two Best Actors Aaron Kwok Fu Sing and Nick Cheung Ka Fai yesterday promoted their film CONSPIRATORS (TUNG MAU) at a shopping center. They host the trailer launch ceremony, played games with fans and shared production experience. Sing Sing said that the his personality was similar to the "seven time Best Actor" Cheung Ka Fai. They already had a lot of chemistry when they worked together for the first time and he praised his great acting. Ka Fai complimented Sing Sing on being very understanding and protective of his co-stars. When he learned that he was afraid of "small animals", during the shoot he often stomped on cockroaches and shooed away rats. He made him feel very warn.

Cheung Ka Fai admitted that due to childhood trauma he was very afraid of "small animals". He said that while shooting in Malaysia, he saw a rat that was the size of half an arm. Sing Sing was afraid that he would be scared and shooed it away for him first. He also joked that if he saw cockroaches at home, he would pretend to be calm in front of his wife and daughter but actually be shaking inside. "If I don't go to hell who would go to hell, but I am more afraid of seeing cockroaches than when I saw corpses as a cop."

When asked about memories from working with Sing Sing, Cheung Ka Fai said that they both have been in show business for awhile but never had a chance to work together. This time they very quickly established chemistry and they were able to honestly chat. Did he ask about Sing Sing's rumor? Ka Fai joked, "I have to ask him for advice on rumor speculation for me. I have been speculating for several decades and still got nothing." He said that he did not see Lynn Xiong (Hung Doi Lam0 visiting the set or pay attention to his rumor with Christine Kuo. He would not deliberately ask either.

Speaking of Ka Fai asking him for rumor speculation advice, Sing Sing said, "I will have to pass him to reporter friends. I understand that the paparazzi are just working for their meals, over the years I just smile and let them be." Recently he supposedly put a flute next at the head of the bed in order to have a son. Sing Sing stated that the report was untrue and purely based on imagination. "I just read it like a joke, the pen isn't in my hand." Did he have any plan to have a child? Sing Sing admitted that for now work came first. Since he has not yet won the Hong Kong Film Award Best Actor, he would like to be recognized domestically and would make it the goal. Even with a family and children later he will still make movies.

Sing Sing said that although this year he was not nominated for a Hong Kong Film Award, he was happy to have everyone's support. Will he attend that night? "I would attend if I am invited, I wouldn't complain at all because I wasn't nominated. I respect the voters' decisions." Sing Sing earlier washed off the blue (difficult) peach blossom. Did Lynn like his new hairstyle? "Don't talk about the past anymore." As for having Indian with a Lama, Sing Sing said that since he was a Buddhist, sometimes when Rinpoche came to Hong Kong he would arrange for meals, a place to stay and meetings with the faithful. He said that the meal that night was vegetarian.
Posted by hktopten at 2:51 PM