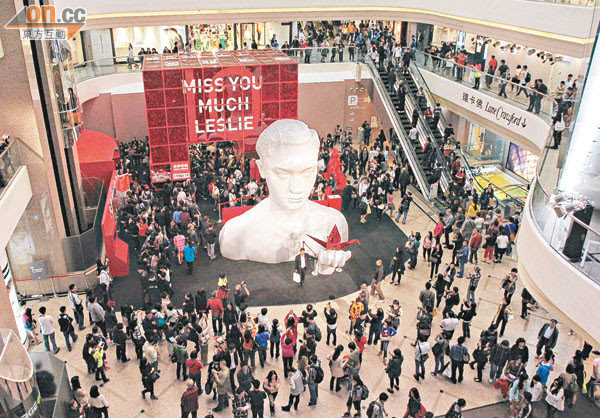 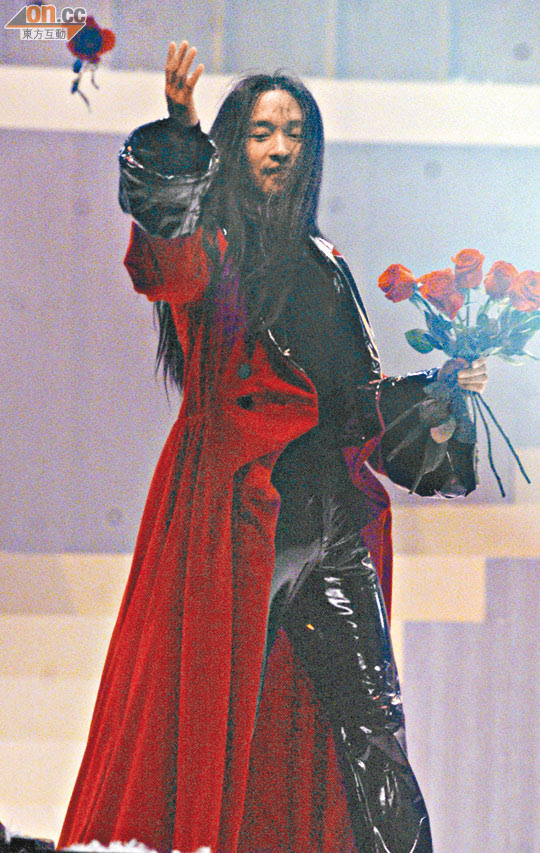 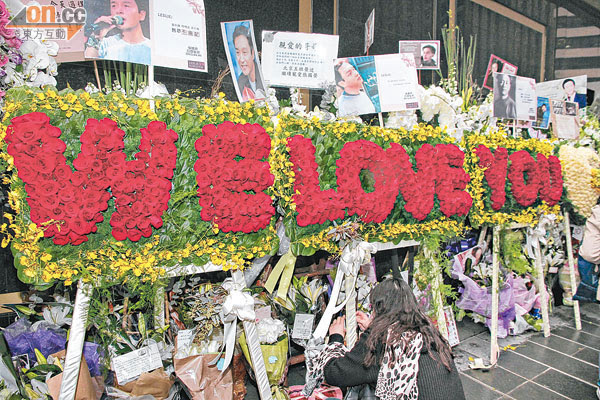 Today is the 10th anniversary of Leslie Chueng Kwok Wing's passing, but fans still miss him no less. Opened two days ago, the MISS YOU MUCH LESLIE exhibition attracted many fans and visitors. They fought to take photos with Gor Gor's white 6 meter tall bust, but because they were so enthusiastic, in less than 24 hours the bust was already chipped in two places and scratched all over. Many Gor Gor fans were heart broken and urged everyone to stop damaging Gor Gor's bust.

The exhibition opened two days ago, the most eye catching was Gor Gor's 6 meter tall bust. The event did not set up any barrier so fans and visitors would be able to make close contact with it and take photos. Yet some people did not cherish it as yesterday the right shoulder were found two two chips and other places have been scratched. Fans worried that the bust will be even more scarred and hoped everyone would cherish it more. Patrick Kong (Yip Lim Sum) yesterday visited. He said that he was a Gor Gor fan and thought that the bust looked very much like Gor Gor. At night he would rush home to watch Gor Gor's memorial concert.

Ten years ago on April 1, 2003, Gor Gor suddenly jumped from the Mandarin Oriental Hotel at Central and ended his brilliant life. Every year fans around the world would present flowers there to commemorate the anniversary. Yesterday afternoon outside the hotel was already a sea of flowers. Over 100 fans gathered with different floral arrangements as well as awards. One said "WE LOVE YOU" with flowers and "Love For You Never Changes" to express their love for Gor Gor.

A Mainland fan said that she was a "post Wing fan", liking him only after Gor Gor passed. She had depression herself. 3 years ago online she read information about Gor Gor, including his films and music, and brought a lot of positive energy to her. This time she was the happiest to see Gor Gor's beloved Tong Tong two days ago at the exhibition. He even waved to her, which was very touching for her.

A group also posted a poster to promote its group tour, taking Gor Gor fans to the Central and Western districts to visit places where Gor Gor left his foot print like music video locations for free. Anyone who was interested could meet at the Mandarin Oriental Hotel today at 2PM.
Posted by hktopten at 2:53 PM