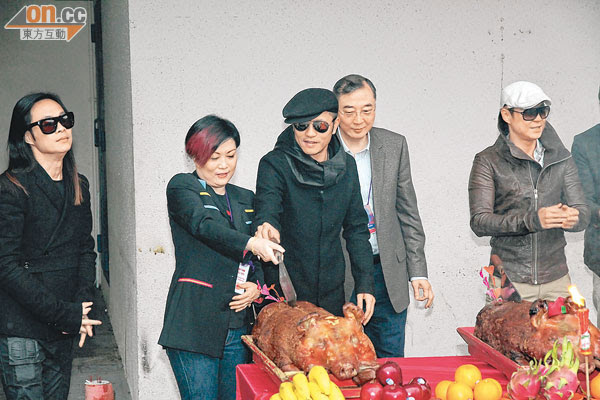 Yesterday around 3:30PM, Chan Suk Fun led the Grasshoppers and the crew to conduct a worship ceremony for the concert. Mrs. Chan revealed that the event theme would be countdown with Gor Gor, with the new songs starting the countdown performance to the old songs. Would Gor Gor's beloved Daffy Tong Hok Tak attend? She said, "I don't know yet, but he has come to the Hong Kong Coliseum to watch the rehearsal. The entire production preparation progress brought back a lot of memories for me." Another event will take place on the April 1. Even though no singer will perform, the event will play many music videos, guest well wishes and never before seen videos. She hoped that the younger generations of "post Wing fans" will be able to understand Gor Gor even more through the interview videos. Later Tai Chi, William So Wing Hong, Andy Hui Chi On, Joey Yung Cho Yi, Anthony Wong Yiu Ming and others appeared at the venue for rehearsal.

Leslie Cheung Kwok Wing was very easy going and willing to help new comers in show business, thus many artists who have received Gor Gor's help and worked with him had nothing but praise. His relationships with elders were great as well. Yesterday many artists online and in interviews remembered Gor Gor.

Andy Hui Chi On: To be a bird with legs requires aura and qualifications, he had them and he truly was able to achieve them. Gor Gor, "ten years" was the same, no one can replace you.

Law Kar Ying: Every year on April 1, how many people miss him? Have you? I have.

Jacob Cheung Chi Leung: Cheung Kwok Wing is a serious performing artists, he would not care about his co-stars' quality. He would only bring them into character. Thus everyone respected him.

Sylvia Chang (Cheung Ngai Ga): Cheung Kwok Wing respected and cared about elder actors very much. When he had time he would eat and chat with them. He cared about the younger generations just as much. He truly was a rare artist.

Shu Qi: I still remember when Gor Gor worked with me on a movie. He held my hand, taught me the lines and the marks. He was very patient, I still wouldn't have forgotten now.

Karena Lam Ka Yun: Every year at this time there would be many red cotton tree flower on the ground, and I would miss you especially!

Cecilia Cheung Pak Chi: Gor Gor, I am great. You don't have to worry about me. Now I have two very cute, very healthy children and live very happily. Wherever you are, you will always be in my heart.
Posted by hktopten at 2:52 PM