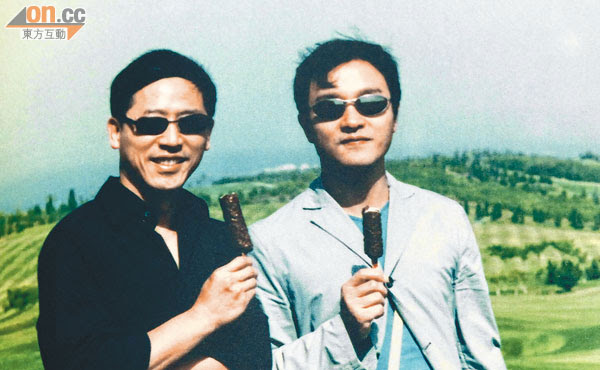 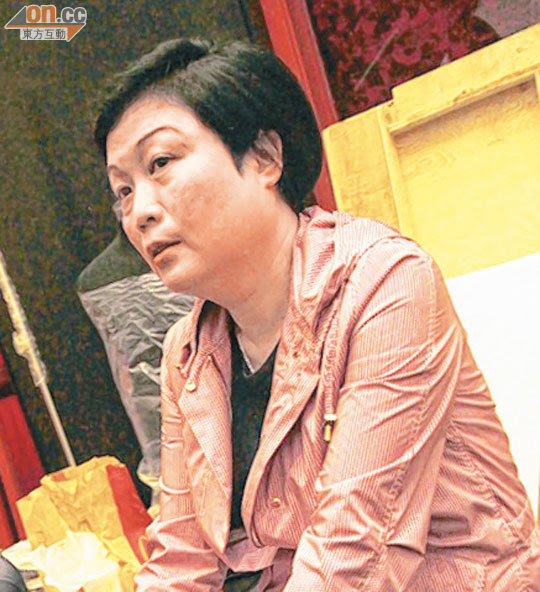 Gor Gor Leslie Cheung Kwok Wing once said, "As long as when you mention the 80s and the 90s show business from now you still remember Cheung Kwok Wing, then I am already satisfied!" For 10 years, his name has not been forgotten due to his passing. As "his own person" who battled shoulder to shoulder with him for years, Chan Suk Fun wants more than for people to remember Gor Gor. This was only a more conservative way of speaking. Gor Gor still wanted everyone to miss him and love him, thus starting last year she already started preparing a gift for Gor Gor. On March 31 and April 1 two different format MISS YOU MUCH memorial concerts at the Hong Kong Coliseum, returning on behalf of Gor Gor a gift for never leaving and abandoning him over the years to fans.

C: Yes, this time I truly have to thank Leung Chiu Wai. He and Leslie were truly good friends, whether Gor Gor was still alive or passed away, Gor Gor would always remain in his heart. This time every guest performer had a strong connection to Gor Gor. Very early on I already personally wrote letters to invite them. Wai Jai not only agreed right away but also only said, "Everything is waiting for your arrangement." During the run down, even if his performance had partial change, Wai Jai's answer was just "I will follow your arrangement!" He never made any special request. He only wanted to do something to remember this good friend. Wai Jai truly was a good friend of Gor Gor.

C: I don't want to reveal the performance too soon, hopefully everyone would watch it then. Because if some contents have been revealed, the show would lose its completeness. That night not only several thousand viewers would be able to enjoy the show live, TVB, Radio Hong Kong, Commercial Radio and Metro will broadcast it either live or on the next day. Singapore, Malaysia, South Korea, England, the U.S., Canada, Europe, Australia and New Zealand will also have simultaneous broadcast at 10PM Hong Kong time. The Mainland will be able to watch the concert on the Jiangsu Satellite channel and iQIYI.COM. Taiwan and Japan will have live broadcast at cinemas. Hopefully any place around the world with Gor Gor fans would have a chance to enjoy it.

Shu Qi Holds Back Tears When Recording Her Video

C: Because truly many friends loved Gor Gor and since this gathering is for Gor Gor's friends to remember him together, over 20 of Gor Gor's good friends recorded videos and talked about their lives with him so even more of Gor Gor's loyal fans and even "post Wing fans" (fans who liked him after his passing) would understand more about Gor Gor. For example they included (Cherie) Chung Chor Hung, Shu Qi, and (Carina) Lau Ka Ling. Shu Qi held back her tears because when she was still a newcomer she and Gor Gor worked together on VIVA EROTICA (SIK CHING NAM NUI). Gor Gor admired her talent very much and even gave her the chance to be his concert guest on the Hong Kong Coliseum stage. He wanted to introduced her to everyone. When Shu Qi told this story she fought back her tears.

R: Mrs. Chan, you truly have presented many gifts for Gor Gor?

C: Although 10 years wasn't a long time, it definitely wasn't a short time either. Yet my emotions now still haven't settled, and I believe that I would never forget. I think that this event will be the final public Gor Gor memorial event, it shouldn't be done all the time. Thus this time I tried to please the fans as much as possible, I even hoped that Gor Gor in Heaven would appreciate my intention.

Conversing with Gor Gor For 10 Hours In A Dream

R: Mrs. Chan, over the 10 years have you seen Gor Gor in your dreams? Did he say anything to you?

C: For a period I constantly dreamed of Gor Gor, then for a long time I didn't. The most memorable time was a very long dream. I was taking a long distance flight back to Hong Kong. For the entire 10 hours on the plane I was with Gor Gor, we kept chatting. Now I still remember over 70% of the conversation in the dream with him. Very realistically and the most wonderfully he told in the dream that because of a reason he would not come to find me for a long time. After that I truly never dreamed of him for a long time. The reason that he told me later truly happened, but because it was a secret between me and Gor Gor, I can't reveal what the reason was. Ultimately my own experience was very real.

R: Earlier Mrs. Chan you said that you would publicize a message at the concert. Later it was rumored that this message was Gor Gor's final words and speculated as a text message or a conversation in a dream. Actually what does this message represent?

C: I can't explain it in a few words. I spent a lot of time and still didn't know how to express it and tell others, I can only say that this truly happened to me. It truly was crystal clear. If I can express it I would have publicized it a long time ago. When I was preparing for the concert, I felt that Leslie gave me an inspiration to use this method of expression at the concert. Hopefully that night everyone would be able to understand, I have already done my best to express it.

R: If you want to say something to Gor Gor, what would you say to him?

C: (thought for several seconds as her eyes turned red) I would tell him "Leslie thank you", which already included a lot. He would understand.

R: You helped Gor Gor and even a group of late friends in the business and truly has given a lot.

C: I didn't really help much, fate goes this way and it can't be changed.

Mrs. Chan and fans who loved Leslie would miss him more than 10, 20, or 50 years. This longing truly is unbroken and without an end date!

Gor Gor since his first Leslie Cheung Summer Concert in 1985 to his final PASSION Concert in 2000 performed 8 major concerts over 15 years, more than half were in collaboration with Mrs. Chan. To Mrs. Chan, her favorite was the 1989 Farewell To Music concert. The most memorable was the 2000 Passion Concert; because this concert's content was controversial. Gor Gor appeared with long hair. Some people before listening to what he sang or performed already defined it as "Cheung Kwok Wing in a woman's disguise". The entire concert content became unimportant, the most important became "Cheung Kwok Wing in a woman's disguise".

Mrs. Chan said, "I truly was very frustrated, how could those criticism be so limited? I am someone who can accept criticism, but it has to be objective and fair. Gor Gor wasn't pretending to be a woman, how could long hair with their personal thinking define the concert? At the time I worked very hard to overturn it. Luckily viewers' eyes were crystal clear. They learned to appreciate it. Luckily it still had fair and objective media that were the voice of justice for the Passion Concert, they even asked fashion designers to analyze Gor Gor's entire concert. It was a transformation from an angel to a demon."

This concert even 10 years later remained in the forefront of trend and left Mrs. Chan with a connection that could not be erased.

Three days before Cheung Kwok Wing's passing, the reporter spoke with Gor Gor over the phone once. At the time Gor Gor was enjoying afternoon tea with Mrs. Chan. Mrs. Chan handed the phone over to Gor Gor. Gor Gor whose voice at the time was still a little hoarse due to acid reflux happily told me, "I will soon record another record, I am even thinking about directing a movie. Now the condition has improved a lot!" How could the reporter believe that three days later when hearing about the news of Gor Gor's death? The question that was asked repeatedly in the mind was "Why?" Mrs. Chan said, "Because of Gor Gor, I started to understand depression. Actually this illness would not get better just with medication. Although this ending was not something that anyone would want to happen, 10 years ago everyone was very confused about this illness. No one dared to tell their family that they had depression. Now they would not worried about it as a hidden illness, they would actively treat it. Thus Gor Gor did something great for everyone."

Gor Gor's unfulfilled dream in life was to be a director. Mrs. Chan said, "If he was still alive, he might have already directed many movies. Thus this time I added a director's chair for Gor Gor's figure, and completing a dream that we thought was unfulfilled for him!"

Strong Woman Struggles To The End For A Good Friend

The impression that Mrs. Chan gave everyone was a strong woman. The reporter thought that her "strength" was not just in her career, but what she did for friends. Someone else definitely would not be able to do it. Her good friends Cheung Kwok Wing, Fei Jeh (Lydia Shum Din Ha), Roman Tam (Law Man), Uncle Jim (James Wong Jim) all passed away one after another. She was not only heart broken but also had to arrange for her good friends' funerals; when a friend was ailing, she gave even more time to take care of him or her. Watching one friend's passing after another, the reporter asked Mrs. Chan, "Do you have depression?" She answered in less than a second, "Of course not, because from Leslie having this illness I started to understand the cause of this illness. I tried to urge friends to keep an open mind."

Misunderstood Because of Fei Jeh

Sometimes she would be misunderstood for what she did for her friends, but as long as a friend asked she would struggle to the end; after Fei Jeh got sick, some friends blamed Mrs. Chan for not letting them see Fei Jeh. Mrs. Chan said, "Honestly, Fei Jeh had many buddies who played, ate and played mahjong with her. They definitely saw Fei Jeh more than I did, but because this group of friends only saw Fei Jeh's happy side, when Fei Jeh got sick she loved her friends too much for them to see her thin, listless and ailing. She only wanted to share with them the "happy nut" in the eyes of her friends. On the other hand Big Amy (late director Chang Cheh's wife) and I became her companions. I remembered at the time I had to work on a concert tour, but every time I returned to Hong Kong, as soon as I turned on my mobile phone I definitely would receive a call from Fei Jeh. She said that she cooked a lot of good food and told me to go to her home to eat." Mrs. Chan began to choke up, "You can imagine how bored she was, she had to call many times before finding me. Later I took all the work to either her home and to the hospital, I kept an eye on her all the time. Sometimes when she woke up and came to the living room to check on me, chatted a little then lay down in peace, because she didn't have to pretend to be spirited in front of many friends. Actually every time after friends visited her, she would be exhausted. I just helped Fei Jeh with letting everyone remember her happiest side and it was enough."
Posted by hktopten at 2:24 PM