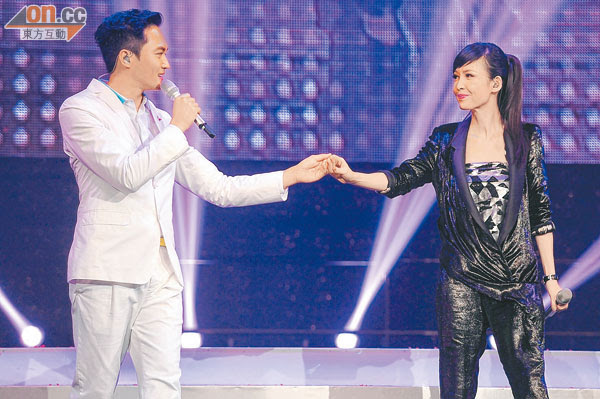 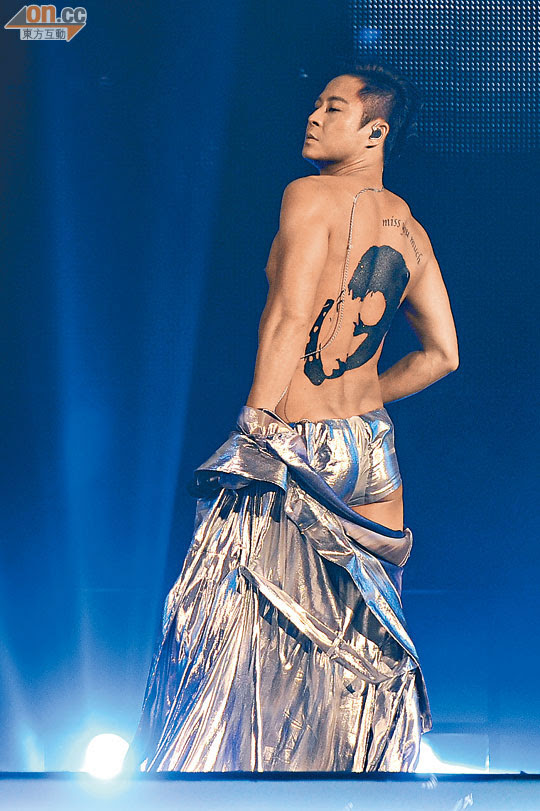 To commemorate the 10th anniversary of the superstar of a generation Leslie Cheung Kwok Wing's passing, Gor Gor's manager Chan Suk Fun starting last night began two nights of different format MISS YOU MUCH LESLIE events at the Hong Kong Coliseum. Last night friends who have worked with Gor Gor performed and remembered Leslie through music. Tony Leung Chiu Wai appeared on stage three time and conversed with his late friend. He even asked Gor Gor if he missed everyone. Jacky Cheung Hok Yau performed in shorts and sandals, he joked that no matter how he dressed he would not be as cool as Gor gor. Mrs. Chan also opened the mystery message and brought out Gor Gor "hoped to have a comfortable sleep".

The concert had around 20 performing artists. Gor Gor's beloved Daffy Tong Hok Tak chose to appear and support the event in a low key manner. The show opened with Chan Suk Fun's recording, telling the mystery message that Gor Gor once left her. She said, "At 6:43PM on April 1, 2003, a loud surprise shattered the hearts of many. At the time I was at the scene and had no idea what happened. Suddenly a voice told me, 'I finally can properly have a comfortable sleep'. I always kept that in my heart and told no one, until I heard this song (Cheung Hok Yau's FOR A FRIEND to Anita Mui Yim Fong), finally understood and said it. Relax! We understand, we know, you will always remain in your free space, we will always miss you!" Then Anthony Wong Yiu Ming appeared on the stage as well as an empty chair, as if left for Leslie.

Wong Yiu Ming performed LOVE OF GLASS. He said, "Gor Gor, 10 years ago you played a big joke on us. That day the entire city shattered; but your passing taught us to care about other people's pain. Although you have gone to such a far away place, everyone still miss you so closely." Then he sang the Gor Gor narrated THIS FAR, THAT CLOSE.

Gor Gor's good friend Tony Leung Chiu Wai appeared with the DAYS OF BEING WILD (AH FEI JING JUEN) theme song as background music. He appeared three times throughout the night, conversing with Gor Gor. At the end he even sang with all the performers WIND CONTINUES TO BLOW. Wai Jai said, "Gor Gor's dream was to become a director. Gor Gor is the director of tonight's concert. All the singers are the actors, and he claps the clapper board." Wai Jai quoted DAYS OF BIENG WILD, "If you want to remember you will always remember". He said, "I remember that you really like this line from DAYS OF BEING WILD. After this period, I finally understand. It also tells me that this life also has progressed, at this minute who is missed the most. Sometimes when I raise my head and stare at the sky, I would thinking about looking for the bird with legs." Wai Jai looked up and asked, "After 10 years, I really want to know, do you still miss us?" Then Gor Gor's concert video was aired. "I miss all of you the most."

Wai Jai said that after Gor Gor left, once he accidentally called his number and heard a familiar voice, "Please leave a message." Wai Jai continued, "I really wanted to say over the phone, let's start over." This was what Ho Bo Wing (Cheung Kwok Wing) also said in their film HAPPY TOGETHER (CHUN GUONG JA SIT) to Lai Yiu Fai (Leung Chiu Wai).

Peter Chan Ho Sun said in his video, "In a movie that we worked together on, he insisted on speaking a line until he thought it was perfect. It was 'Whether you are a man or a woman, I just know that I love you'." The crowd applauded. Hok Yau appeared in sandals and shorts. He said that his look respected Gor Gor the most because it was his favorite. Yet he definitely was not as cool as Gor Gor. Hins Cheung King Hin performed with a "male female mix" look. Remus Choi Yat Kit had Gor Gor's image on his back.

Vivian Chow Wai Man sang the song that Gor Gor wrote for her, IF YOU KNEW MY DIFFICULTY. She choked up as she said, "Maybe for Leslie writing this song was easy, to me it was an incomparable honor." Kelly Chen Wai Lam and Joey Yung Cho Yi sang Gor Gor's hot hits. Sheung Tin Ngor sang the theme song of her series with Gor Gor, ONCE UPON AN ORDINARY GIRL (NUNG BOON DOR CHING).

After the performance, Chan Suk Fun lamented with her eyes all red that the production was not perfect enough. However the stars comforted her and said that she already did very well. Gor Gor would definitely be very happy to receive this gift.

Last night many friends made videos about Gor Gor and made more understand Gor Gor's brilliance in the eyes of his friends. When Gor Gor's first love Teresa Mo Shun Kwan appeared on video, the crowd roared. When she remembered Gor Gor she was so emotional that she was teary eyed.

Mo Shun Kwan: Gor Gor and I both love Cantonese Opera. He once hired a band, our favorite was to perform Yam Pak. After Gor Gor's passing, every time I hear Cantonese Opera I would think of him.

So Sze Wong: A medium friend said that he dreamed of Gor Gor, asking him to tell his friends "stop being heart broken over me". Today I am dressed in pink because I want to say that life goes on, don't be heart broken anymore. Do you hear me? From now on only said Miss You Much Leslie!

Carina Lau Ka Ling: Every Lunar New Year I would receive peach blossom from Gor Gor. After Gor Gor passed, I continued to shop at the place that he introduced to me because I wanted to preserve that feeling of flower shopping with Gor Gor as a memory.

Tony Leung Ka Fai: I always said Gor Gor was petty as he would easily get mad at people. Yet he wouldn't be mad for more than 5 minutes. This was Cheung Kwok Wing.

Cherie Chung Chor Hung: When we made a movie overseas, when we were together Gor Gor would share a lot with me. Sometimes we would fight over the same thing when we shopped, but when he saw a suitable gift he would give it to me. He truly loved his friends. Gor Gor has always stressed "forever", which he has already achieved. He is a legendary superstar.

John Woo (Ng Yu Sum): Every time I heard PAST LOVE (song from A BETTER TOMORROW), I would have a very loving feeling. I will happily live my life!