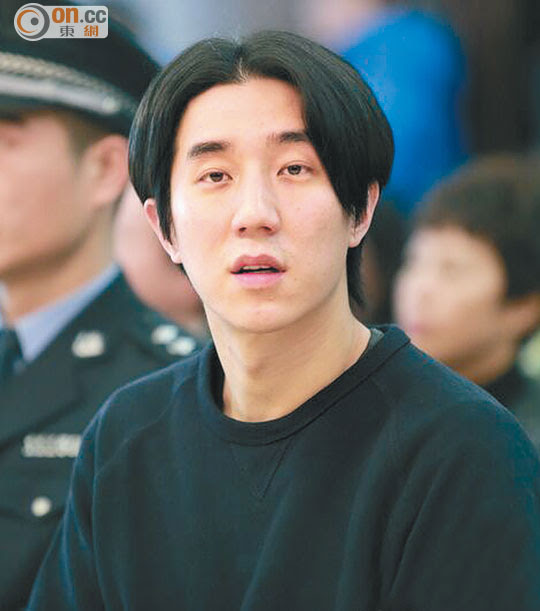 On the morning of the 9th, the Beijing Dongcheng District court found Jaycee Chan (Fong Cho Ming) guilty of "sheltering others to use drug". He was sentenced to 6 months in prison and 2,000 yuan fine. The sentence began from his detention on August 14, 2014 on and will end on February 13, 2015. Fong Cho Ming's parents Jackie Chan and Joan Lin did not appear in court. The court felt that Fong Cho Ming when questioned by the police truthfully admitted to the fact that he harbored others' drug use, which legally was considered a confession and could reduce his penalty. Since he only provided shelter for others to use drugs four times, each one he only harbored one person, the case was considered light and could be given a lighter sentence.

Before 8AM, Fong Cho Ming arrived in a court vehicle to the courthouse. Around 8:30AM, Fong Cho Ming's lawyers entered the courthouse through the back. The lawyers made no comment to the press. Reporters inside the courthouse saw Fong Cho Ming's manager also on hand. Around 9:30AM, the bailiff brought Fong Cho Ming to court and the trial officially began. The Beijing Dongcheng District Court's official Weibo broadcast the trial live. Over 100 people were presented in the courthouse, with several dozen reports from Hong Kong, Taiwan and China media outside. From the photos on the official Weibo, Fong Cho Ming did not appear to be worn out and different from the bald and in prison uniform look that past prisoners had, he parted his hair down the middle and wore blue casual wear. A third party lawyer explained to the Mainland media that the law did not have stipulation on the suspect's clothing. The suspect could wear his own clothes to court.

After Fong Cho Ming entered the court, he confessed to his own crime. When the judge asked him, "If you admit your guilty you will face legal consequences, have you clearly considered that?" He answered, "Yes, I have considered it clearly." Although he was not loud, his attitude was great. In court, Cho Ming talked about on the day of the drug use his arrest with Ko Chen-Tung and others. Two years after his arrest, Fong Cho Ming said in the police office that he had marijuana at home. "I didn't know what they wanted, so I gave the information to them. I did that on my own, because I didn't know how to handle marijuana I wanted to turn it over to the nation." Fong Cho Ming even said that he provided shelter to others for drug use 4 times, 3 times to star Ko Chen-Tung and once to female star Li Xiaonan (Lok Si). The location was either a room or a bathroom in his home. According to him, his assistant Sun purchased the drugs for him. Because he used marijuana in the Mainland, he said that he knew it was illegal.

Fong Cho Ming said in his final testimony that he will not break the law again. "I broke the law and should be penalized. After returning to society, I absolutely will not break the law again because I would disappoint my family and friends again. However, I received the penalty that I deserved. It did not represent that I received forgiveness and pardon. I hope to receive an understanding with my action from now and deliver a positive message."

Earlier Jackie Chan in an interview said that he has asked the lawyers not to attempt to shorten Fong Cho Ming's sentence. He also admitted that after his son's detention he has never used any relationship to attempt to resolve the matter.

After his arrest, Fong Cho Ming's first public appearance was in court yesterday. Cho Ming sat at the defendant table without any handcuffs, his attitude was sincere. Fong Cho Ming was willing to plead guilty and admitted to provide shelter to others for drug use 4 times.

The prosecutor conducted "court education" with Cho Ming. "The defendant as a public figure has even greater influence than an ordinary person. I hope that you would realize your own mistake, know to turn around after getting lost, and establish a sunny and healthy image." Cho Ming's defense attorney said that Cho Ming gave a confession, was honest with the detail, had good behavior, little malice, provided shelter for others to use marijuana, which was less toxic than other drugs and less damaging to society, in addition it was his first offense, thus he asked for the court to give a light sentence. Around 11AM the judge gave the verdict, finding the defendant Fong Cho Ming guilty of sheltering others' drug use and sentencing him to six months in prison and a fine of 2,000 yuan RMB. When Cho Ming was brought out of the courtroom, he bowed to the judge and the prosecutor.

Cho Ming's manager yesterday was also at the trial. He said that the company was pleased with the verdict. They would respect the law and the family also agreed with the verdict. At the same time she has also called Jackie Chan and Joan Lin. They thanked everyone for their concern for Cho Ming and hoped that Cho Ming after this case would have learned his lesson and for the society to give Cho Ming another chance. As for Cho Ming's plans after his release, his manager said that he has not contacted him personally. The lawyer meeting after the verdict would deliver his family's concern to him through the lawyer. The future would depend on his intentions. Later the family will be able to apply to visit Cho Ming in prison. Jackie Chan, Joan Lin and Jaycee Chan's management company all respected the verdict and would not file an appeal. He in court promised to never break the law again and in the end Cho Ming was found guilty of sheltering other's drug use.
Posted by hktopten at 12:54 PM