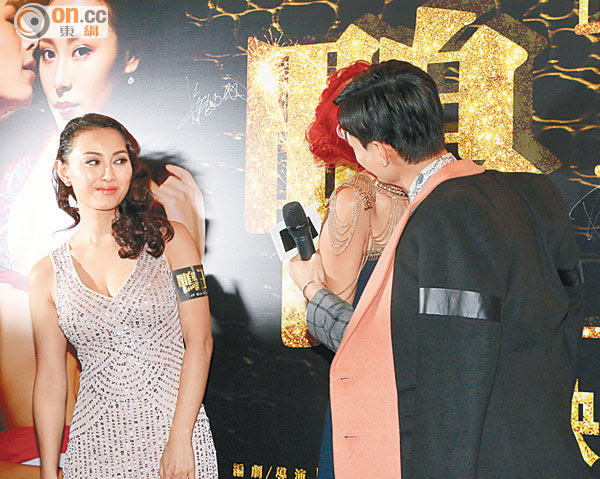 The film THE GIGOLO (NGAP WONG) two nights ago held a premiere, during which Jeana Ho Pui Yu and Dominic Ho Ho Man hug and kissed on the stage three times. Jeana even got flowers from a female friend and got more of the spotlight than lead actress Candy Yuen Ka Man, who looked very upset.

Jeana denied that she deliberately "planned something", only that she and her friend of many years Dominic felt like it. Whether they would develop into something further she would let it take its natural course. Did she deliberately isolate Yuen Ka Man? She said ambiguously, "No, collaboration depends on destiny, but it depends on if we are destined not to be together, haha!" Dominic added, "I don't know if it's destiny or done?"

Yuen Ka Man insisted that she was not being neglected and said that they were hugging and kissing as a formality. She asked if she had to pull them apart instead? As for the number of her bed scene going from two to six, she admitted that the sudden additions caught her off guard. "The director is new, of course there is addition and removing. Yet some of the last minute love scenes are beyond my expectation, so at the time I really cried. (Was it a way to get more out of what they pay?) Because the contract is confidential, I am not at liberty to say. I can only say that earlier I went to Australia to recover. Because I am a chicken, every day during the shoot I cried."
Posted by hktopten at 11:36 AM