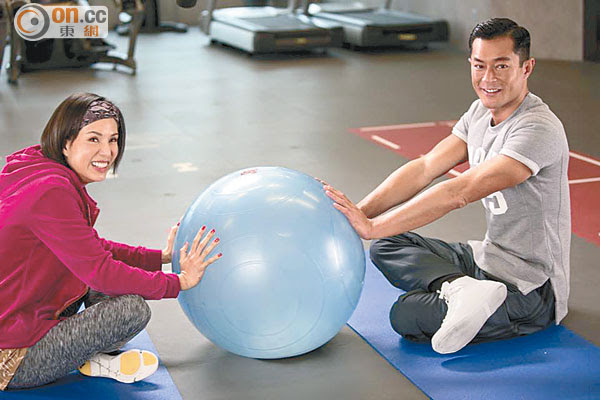 Kwan Yu said that on February 13 at the Victoria Park Lunar New Year Fair she will set up a "duck shop" stall to sell lucky bags for charity. She will personally make an appearance and supervise. She said, "This year I spent several hundred thousand for a Victoria Park stall bid. Even if the stall will not be the prettiest one there, it will be the most golden stall! In our lucky bags will be boxer and tea bag, not that type for wearing but for drinking. After drinking this tea you will feel energized. I already saved some for Father (Ha Chun Chau). He needs it as he is in his 80s."

In addition, after 15 years, Goo Jai in the film will work with Lee Yeuk Tung again. How did the THE RETURN OF THE CONDOR HEROES reunion feel? He said, "We haven't seen each other for over a decade, we haven't even run into each other at public events. We only ran into each other once on a plane. I believe many people are looking forward to it. She doesn't look a day older even after 16 years." Kwan Yu said that they were both single. She once jokingly asked Lee Yeuk Tung if they had any spark from working together again. She said that Goo Jai did not look a day older after 16 years either, he was still hiding in the corner by himself. Was she afraid of further rumors and thus did not arrange for Michelle Chen and Goo Jai to have any scene together? Kwan Yu said, "Of course not, but everyone wants to see 'Goo Goo' and 'Gor Yi' more. (Are you afraid that the audience won't like Michelle Chen's chubby cheeks?) Don't say that, she is very pretty. In the film she is my goddess, girlfriend."

As for Si Hing he said that he will help with the Victoria Park supervision. Will he wear only Boxers? He said, "Kwan Yu earlier kept telling us to lose weight, but I didn't have to take off my clothes in the entire film. Let's see if I will have a chance at the New Year Fair. (Will you ask Joey (Yung Cho Yi) to go with you?) No, that's too old fashioned. Having several of us "boyfriends" to watch the shop is enough, we can take shifts." He also denied that Joey only agreed to guest star because of him. He also said that he did not help bring together Joey to be the Miriam Yeung Chin Wa's concert guest. He said, "I am Lau Ho Lung, not the middle man." Joey revealed that she really wanted to find a good home, Si Hing said that for now work has to come first.
Posted by hktopten at 1:01 PM