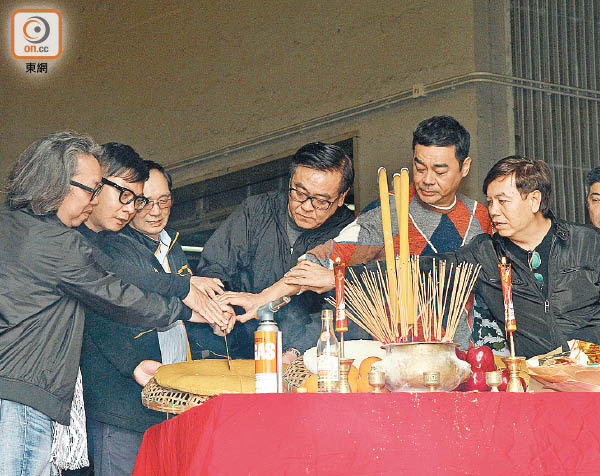 Sean Lau Ching Wan, Derek Yee Tung Sing, Chin Ka Lok and others yesterday attended the Hong Kong Film Award worship ceremony to pray for a smooth program. First time Hong Kong Film Award host Ching Wan said that his hosting script was almost completely rehearsed. Before earlier he was working on a film in Kungming, luckily the creative team finished his script for him. Was he nervous? Ching Wan said, "I am. For so many years I sat in the audience, this time feels fresh." Ching Wan joked that he did not mind the long hosting script, he was the most afraid of the audience staring at him. He said, "I hope no one would stare at me, I would just act like I am making a movie." Would he have any special segment? He said, "In the opening I would introduce Hong Kong film to myself as many Ching Wan, with multiple personality like THE MINDS OF BILLY MILLIGAN."

This year's Best Actor and Best Actress races are fierce. Ching Wan admitted that he did not watch all the nominated films so he did not dare to comment, but he joked that the fight for Best Actor was fierce because he was there to be a runner up. Would Ching Wan take the chance to make a declaration of love to his wife Amy Kwok Oi Ming? He said, "I am only the host, I wouldn't have any emotional expression or declaration. In addition this year (the event) wants even more time for guests and winners to speak."

To coordinate with the Hong Kong Film Award theme of "Child Voices, Same Films", the event program interviewed many actors who started as child stars like Josephine Siao Fong Fong, Paul Chun Pui, and John Chiang Tai Wai. Siao Fong Fong revealed that when she was seven and working on a tragic scene she was unable to shed any tear. The director erupted into a tyrate; but Fung Bo Bo at age 4 was already in full control of her emotions as she was able to cry on cue. She truly was a "prodigy". Chun Pui pointed out that Fung Bo Bo was the lead at age 5 or 6, praising her as the only real child star.
Posted by hktopten at 6:06 AM