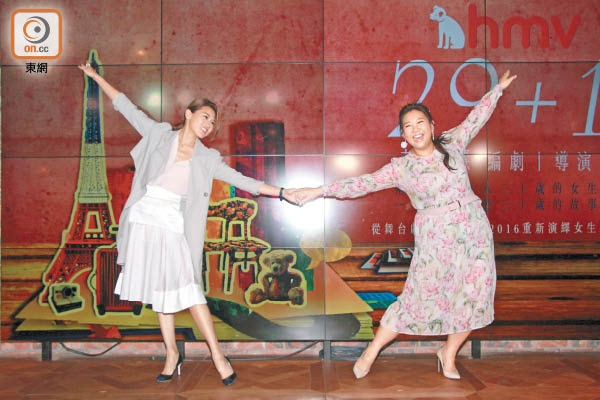 Chrissie Chau Sau Na, Joyce Cheng Yun Yi, Elaine Kam Yin Ling, Catherine Chau Ka Yi, Kathy Yuen (Tong Yi) and Babyjohn Choi Hong Yik yesterday attended the film based on a play of the same title 29+1's production start ceremony. The film was about women stepping into the age of 30. The 30 year old Chrissie said that she was very sentimental about making the film and even stated that she really wanted to date. Yun Yi who also wanted to date just as badly joked that this year she will have to be in three wedding parties. Would she think about getting married? She hoped to find someone who would make herself happy. "In this business I always have to make people happy, I want to have someone to make me happy." Would she date to find someone to marry? Chrissie said, "Before I was 30 I was pretty scared, but when I reached 30 I felt it would pass. I want to tell people that I am still very young and radiant. I really want to find someone who understands me." They stressed that they were single and welcomed suitors. Yun Yi said, "I love roses and peonies." Chrissie said, "The more suitors the better."

Kam Yin Ling revealed that in the film she guest starred as Chau Sau Na's mean boss. They would work together for the first time. She also liked new blood in the film industry. Kam Yin Lin earlier won the Hong Kong Film Award Best Supporting Actress with the film PORT OF CALL (DAP HUET CHUM MUI). She said that her friends already took her to many dinners to celebrate. She also received gifts and lai see, which she was embarrassed to accept. How did her companion Suzi Wong celebrate with her? She said that Ah So invited a group of friends to dinner. She also bought over 100 tickets to take her friends to the movie. Has she celebrated with her daughter? Kam Yin Ling said that her daughter was in London, but asked if she thanked her during her acceptance speech.
Posted by hktopten at 7:33 PM