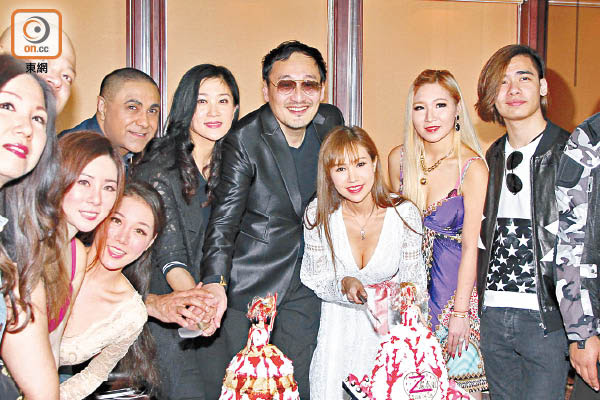 Xanadu, Q Bobo and Sam Leong Sing Chi yesterday attended their film SI SIU JEH (MISS CORPSE)'s production start ceremony in Causeway Bay. Xanadu in the film did not have any sexy performance, but when she cut the cake and opened champagne bottles she leaned over to show off her cleavage.

Xanadu played a night club dance escort and a zombie. In the film she had foul language, violent and horror scenes but she would not have any sexy image. She joked, "This film is about social phenomenon, this time the character has a lot of breakthrough. I don't have to be sexy, no intimate scene, but I have crying scene. My character would even die. The film will later be screened online. I will even sing the theme song."

Once an ATV program host, Sam not only wrote, directed and starred in the film but also invested in it. He played a mob boss in the film and had some ambiguous relationship scenes with the night club mamasan Kiwi Yuen Kit Yi. He joked that the emotional scenes were more difficult than the action scenes. "The film has a little fight scenes, I will perform them myself. The hardest is the reserved emotional scenes with Yuen Kit Yi. The difficulty is with the reserved performance, I can't give a wild performance! The film story has been in conception for a long time, I want to express Hong Kong's social problems."
Posted by hktopten at 2:59 PM