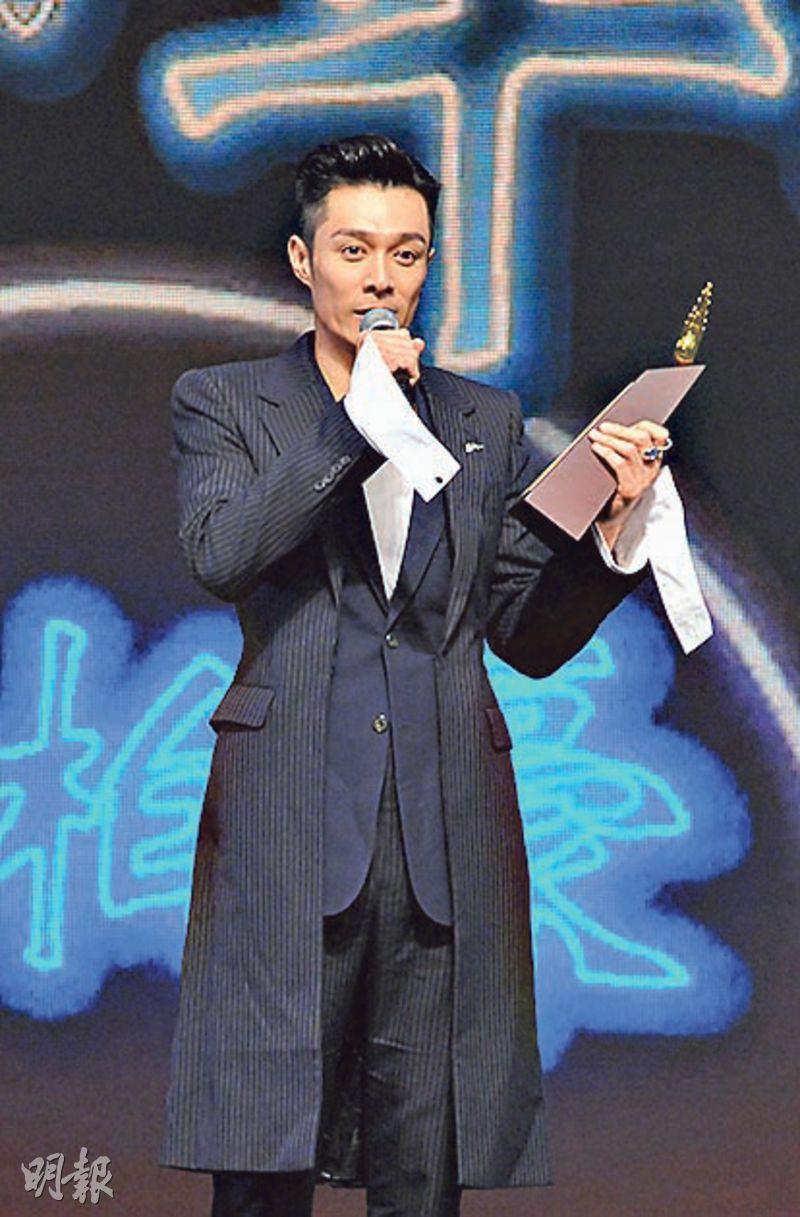 The 2018 Commercial Radio Ultimate Song Chart Award took place last night at the Convention Center. This year's theme was "Our Songtopia", meaning that everyone had an award show that belonged to them in their hearts. The even presented 43 awards. "My Favorite Song" went to CENTENNIAL TREE. Louis Koo Tin Lok after 19 years appeared at a music award show again and won "My Favorite Male Singer" as the favorite. He even made an exception and sang BOYFRIEND acapella to bring the evening to its peak. He joked, "The world really has miracles, I actually get to go on this stage and accept this award!" Kay Tse On Kay after 14 years in the business defeated "nemesis" Joey Yung Cho Yee for the first time to win the Female Singer gold prize, with 3.5 awards she even became the big winner. Joey also won her long sorted after "Ultimate Song" award to complete her "grand slam" dream. Everyone went home happy.

Silver prize winner Tsang Lok Tung thanked her grandpa who was on bed rest due to illness and got teary eyed. She believed that although Grandpa might not see her win, he would be able to sense her joy. Tsang Lok Tung also gave special thanks to elder Cheung King Hin because he unconditionally helped her with her stress as a new comer. Gold prize winner Kaho Hung said that he grew up a lot in the past year, which was also full of setbacks. Because he often had his head down and lived in uneasiness, after the award he had to remind himself no to lower his head anymore and to keep making good music.

Best Actor Koo Tin Lok since winning the new comer award in 2000 again with the duet (A MAN) A WOMAN AND THE BATHROOM successfully gained "popularity" among listeners as he defeated Chow Kwok Yin, Chan Pak Yu, Eason Chan Yik Shun and Cheung King Hin for "My Favorite Male Singer". Goo Jai made a surprise appearance with his arms raised high, as the entire audience gave him a standing ovation in support.

Koo Tin Lok said, "I really like to sing, bu I don't know how to sing! Please don't stand, I am not accepting the Lifetime Achievement Award. Winning My Favorite isn't something that happens overnight, I know I won My Favorite not because of my great singing." Goo Jai explained that last year as the Performing Artist Guild president he met with many singers, understood their difficulties and hoped to revive the music industry. He said, "I discover that the fire in everyone has never been extinguished. I am very happy, I can get on the stage. I hope everyone can continue the dream and the fire in their hearts, Papa taught me not to be afraid of being taken advantage of. I am not saying that the duet with Tse On Kay is being taken advantage of, it is daring to try, daring to do, never give up, keep making good Cantonese songs!" Goo Jai graciously sang and invited Joey, Kay, Juno Mak Chun Lung and Cheung King Hin to the stage for "courage" as background singers. However he declined to sing POPULAR THIS WEEK, instead he finally sang a few verses of BOYFRIEND acapella and won the entire audience's applause.

At her 20th anniversary in the business, Yung Cho Yee over the years at different awards show received different awards. This year she finally won her first Ultimate Song Award. When producer Shu Man pointed out that exciting people and events needed time to wait for them to happen, Joey was already in tears. She said, "I started in the last century. I was a 1999 new comers, all along with everyone I longed for the Ultimate Song. With that state of mind and hard work I performed every song, until today in 2019 when the Ultimate Song was presented to me. Thank you everyone!" However she did not land in the top three for the Female Singer award.

Tse On Kay since starting in 2005 won her first Female Singer gold prize. She emotionally embraced her colleague Mak Chun Lung. She said, "Actually I haven't attended an award show for several years, I once was disillusioned and really wanted to rest. My music once brought me a lot of memorable moments, but I didn't know how to handle them. I thought about letting go of music. Today I face an award show today, instead I changed my state of mind. I can openly face it because what I see here isn't defeat or victory, but sincere support. Thank you!" She even won a song award, My Favorite Female Singer and split Ultimate Record with Mak Chun Lung. Wiht 3.5 awards she became the evening's big winner.

As for Male singers, Cheung King Hin this year won the gold prize as the favorite. After 2015 and 2016, he won this award for the third time. He also won a song award and My Favorite Song, pocketing three major awards. Hui Ting Hung and Chow Kwok Yin won silver and bronze for Male Singer.

Song writer award went to Cousin Fung. He made a comparison to a wrong beef noodle order, sometimes he did not know what kind of song singers would want. He also thanked his wife for helping him with his choice of clothing, otherwise he would dare to wear "boxers" to the stage. Lyrics award went to Abrahim Chan Wing him, who said that he though about whether he would have jeer or applause. He expressed that musicians often would have the speech overshadowed by such noise and lose themselves in music. However he would continue to work hard and make good music. In recent months he faced personal attacks online. The host said that he originally was unable to personally accept the award and planned to have Pakho Chau accept it on his behalf. Chan Wing Him originally was singing backup for Andy Lau Tak Wa's concert, later Wa Jai cancelled his concerts due to the flu and Chan Wing Him was able to accept the award in person. The producer award went to Shu Man.

When host Pitar Leung Man Lai presented the Ultimate Top Ten number eight song PEACE FOR YOUNG AND OLD, she mistakenly said Chow Kwok Yin instead of Pakho Chau. Both singers stood up at once, but Endy graciously congratulated Pakho Chau and even walked him to the stage.

Later Chow Kwok Yin with OLD BOMB won the number six song. He excitedly darted to the stage to accept the award.

In the "Ultimate Remembers Ellen Loo" segment, a special edit of Lo Hoi Tung's interview recordings and videos was played. In it Ellen mentioned her relationship with guitar, once due to too many performances she minded it. "Later when I embrace guitar anew, I felt like a little kid again. A simple melody actually could be great, actually the simpler it was the happier it was. Then I could write songs ago. My relationship with guitar was very complicated yet very simple." The screen displayed "Wish you happiness, blank space here". Then her song IF STILL HAVE TIME was played as the lyrics went, "Clouds palely shine, your smile never ages from here on."