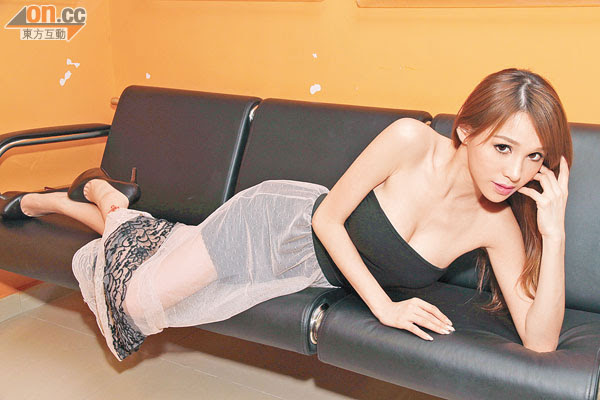 Chrissie Chau Sau Na's boyfriend Avis Chan Wai Sing and Model Ma Mia Chen Jing Yi had many bed scenes in their new film LAN KWAI FONG 3 (HEI OI YEH PO 2). All the winking back and forth they were linked together in gossip. Avis was not afraid of Mia's jealousy when he praised his girlfriend CHau Sau Na. He said, "She has high emotional quotient, which I trained. I admired her 'Chau Sau Na' spirit the most. She not only worked hard, but also because she didn't want to worry anyone around her she would stay tough and never complain." He also said that their personalities were close so they rarely argued.

Although Avis on the LAN 2 set was lucky, he admitted that he did not know about the set operation details. A car window breaking scene ended up "bloody". He said, "Originally the hand had to be made up like it was bleeding, but it was really injured. However acting was truly a lot of fun." Mia understood that some did not appreciate her taking the sexy route as a mother, but off camera she was a kind mother and revealed that she had a headache over her children's summer lives. "I am busy with film promotion, I can only help them enroll in music and taekwondo courses to pass time. Maybe later I will go to Japan with them."

Mia said that she was willing to make money by baring flesh, her biggest motivation was to improve the children's lives. Did she regret that she became a mother too soon? She said, "Absolutely not! My friends said since I had them early I could ditch them early. If all goes as planned I never thought about having another." Mia mentioned her father's passing from cancer last year, which stressed her mentally and made her once thought about quitting show business. "Ultimately my family has never given me any pressure, instead they have been very supportive."
Posted by hktopten at 8:52 AM