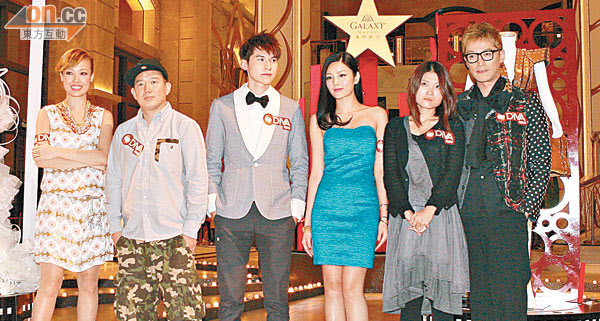 The Joey Yung Cho Yi, Chapman To Man Jat and Carlos Chan Ka Lok starred DIVA two nights ago held a premiere in Macau UA Galaxy Cinemas. Joey's boyfriend Si Hing (Wilfred Lau Ho Lung) will celebrate his birthday next week, Joey stated that due to work she might not be able to spend it with him. Speaking of whether she would consider cooking a candle light dinner to compensate, she awkwardly said, "I would go and learn!"

The cast three nights ago just attended the premiere in Hong Kong. Two nights ago they went to Macau for the premiere there. Many Joey fans appeared as well. After watching her performance the night before at the Hong Kong premiere, Joey said with a smile, "When I saw my complex emotional performance in the film, I felt like I was giving birth!" She revealed that her stomach hurt nonstop on the night of the Hong Kong premiere. Her dress had tapes that tug on her skin rather painfully. She wanted to rip it off. She also said, "The film actually put in my own concert footage, so I had a lot of memories." She revealed that her mother and brother also attended the Hong Kong premiere. Her mother praised that her performance has improved. Her brother also was able to understand her days at work. Reporters asked whether her mother had any comment about Si Hing in the film, she said, "Not much to comment on!" As for Si Hing's absence at the Hong Kong premiere, did she have any regret? Joey responded, "Si Hing that day had to work on a series, I don't feel any regret!" Would she watch the movie again with her boyfriend? She said, "Let me have the time first!" Speaking of Si Hing's birthday on the 13th, Joey said that she will be promoting in Foshan and Dongguan. Then she will have to go to Guangzhou. She had no way to rush back to Hong Kong to celebrate with her boyfriend. She also said, "Si Hing had to work on the series on his birthday too!" Did she regret that she had no way of seeing her boyfriend on his birthday? Joey stressed that she would not. She has not prepared a gift yet. She said, "If we will be free then we will have dinner together!" As for a candle light dinner, she replied, "Great. (Will you cook it?) Let me learn!"

To Man Jat said that in the film he played a villain for the first time. He said, "After the premiere, Mani asked me if I was reflecting her. Actually I told her that it wasn't just pretend bad, all Hong Kong knows she is the bad guy!" He joked that Mani has threatened him not to say that she was a bad person, otherwise she would expose his "bad stuff". However Ah Jat said, "I said her bad stuff could take ten years to expose!" Speaking of Si Hing's absence from the Hong Kong premiere, Ah Jat clarified that all the actors were invited. However he due to work was absent. He also asked Si Hing to buy a ticket and support himself. He said, "Even (Felix) Chong Man Keung said Si Hing would be my successor!" Emperor new comer Chan Ka Lok said that at the Hong Kong premiere he watched his performance for the first time. He joked that his eyes were swollen from crying. He revealed that on the night of the premiere, Mag Lam Yun Tung sat next to him. Did Lam's boyfriend Sheldon Lo (Law Hau Yung) appear? Chan Ka Lok did not directly respond and only said that she and Lam Yun Tung were focused on watching the movie.
Posted by hktopten at 1:50 AM