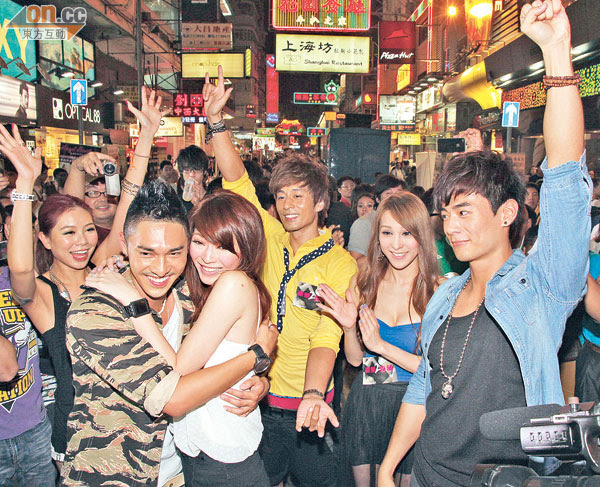 The film LAN KWAI FONG 2 (HEI OI YEH PO 2)'s actors Kelvin Kwan Chor Yiu, Shiga Lin Si Nga, "Ma Model" Mia, Avis Chan Wai Sing and others two nights ago reprised the "walk backward" scene in Mongkok but did not arrange for any security, only a few workers formed human chain to protect the artists. Of course in the end it was not too useful as the crowd flocked. In order to take photos or to catch a glimpse of the artists they pushed and shoved, blond young people began to exchange foul language. The scene was extremely chaotic and completely neglected the people and the media's safety.

As for walking in the crowd, Mia actually continued to push up three inches of "career line" on her chest and posed for photographers. She said that because she was in the midst of career she could not put away her chest. When the box office reached 6 million she would have to celebrate. She also said that she sensed the passion of the people. Speaking of the foul language, Mia said that she truly was somewhat afraid as she has never seen such chaos. She would suggest security next time. Shiga also said that each girl had male protection. They each had 42 inch chests and studied kung fu. Was she worried about a stampede? Shiga helplessly said, "I never thought about it. This time was completely unexpected. I am very happy to be able to in contact with viewers in such close distance. I haven't been to Mongkok for awhile. I really don't know how it is now." Mia also said that next time they might promote indoors. The film company could also plan a little better.

Director Wilson Chin Kwok wai said that he knew nothing before hand. He thought public relations would provide security. Were they trying to save money? He had no idea. Actually he too would have brought out the foul language. This time must be looked at in detail.
Posted by hktopten at 7:28 PM