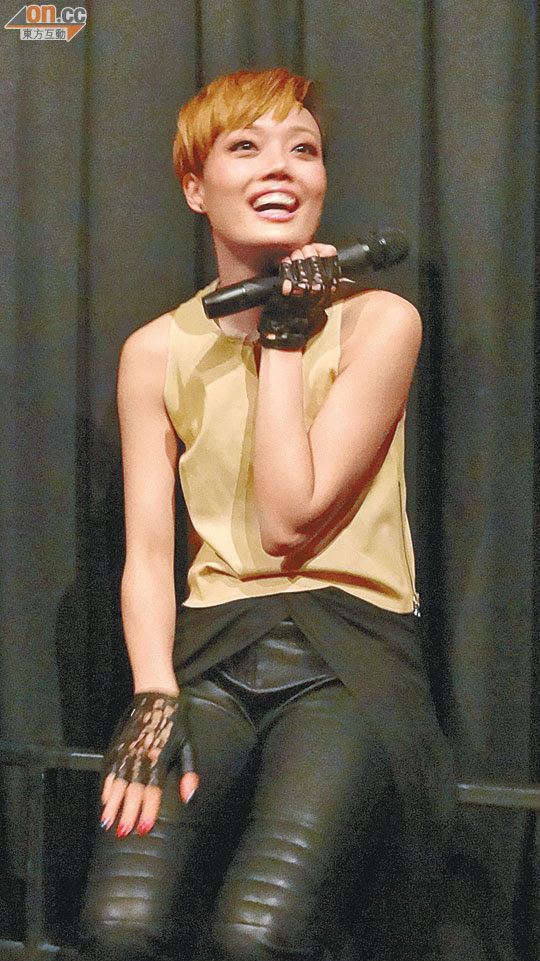 Joey Yung Cho Yi and Chapman To Man Jat visited 8 cinemas over 2 days for their Emperor Motion Picture DIVA audience appreciation. When Joey saw the sold out shows, she was both touched and grateful for the viewer and fan support. They even made surprise appearances for lucky drawings. A female viewer was so happy that she called To Man Jat "pretty!"

The Yung Cho Yi, Hu Ge starred, To Man Jat produced and starred Emperor film DIVA three days ago was released officially in Hong Kong. Joey who has promoted the new film with intensity in order to thank Hong Kong viewers and fans along with producer To Man Jat visited 8 cinemas over 2 days and conducted audience appreciation at 12 shows. Appearing as the female lead, Joey saw the many sold out shows was very emotional. The music diva has accumulated a lot of Hong Kong Coliseum sold out show experience, but she felt even more touched to see viewers fans at the cinema sold out shows.

Joey and Ah Jat two nights ago not only made surprise appearances for audience appearance but also held lucky drawings with viewers. They gave also personally autographed posters. Many viewers happily praised them as handsome and pretty, one female viewer saw To Man Jat and praised, "Pretty girl!" Joey joked that why she did not received the same praise. Joey's fans also gave gifts to their idol. During the viewer interaction, Joey asked viewers the best part of the movie. When the audience said "I will take it!" Joey was reminded of the line when she fell into the gutter in the film and responded in kind. Ah Jat at every show also asked the audience to give more applause and encouragement to Joey, because Joey put all her effort and got into the emotions of the film. Ah Jat said that Joey's performance was good. Speaking of the box office, Ah Jat said that the opening box office felt decent and was satisfied as expected. Joey said that as long as the producer was satisfied with the box office she was fine.
Posted by hktopten at 12:46 PM