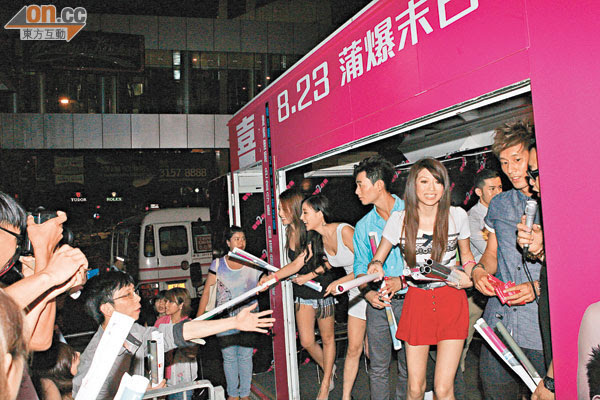 The film LAN KWAI FONG 2 (HEI OI YEH PO 2) two nights ago held an advanced screening. Shiga Lin (Lin Si Nga), Liu Yuqi and the actors Dominic Ho Ho Man, Sammy Sum Chun Hin and Avis Chan Wai Sing attended. The actors played question and answer games with the audience. When asked where female lead they would like to run into at night spots the most, someone screamed Chrissie Chau Sau Na who was not a part of the film. As for male leads, a viewer jokingly screamed "(Raymond) Lam Fung and (Ron) Ng Cheuk Hei". Earlier linked to Lam Fung in rumors, Liu Yuqi looked upset.

Reportedly when Liu Yuqi and Sum Chun Hin had dinner and talked about Lam Fung, she could not help but break down in tears. A magazine even had the headline "Lam Fung and I have sex but no love". Two nights ago they responded. Sum Chun Hin supported Liu Yuqi and said that she did not cry. That day they were chatting and the atmosphere was great. Did Liu Yuqi cry to him about Lam Fung? He said that he was not at liberty to talk about other people's business, but he felt that Liu Yuqi was a strong and mature person. He would like everyone to give her some space. Liu Yuqi also said that she would not cry so easily. Was her affair with Lam Fung resolved? She said that one girl sometimes would think too much, she was fine and hoped that no one would keep writing. "Please don't bother me. I can withstand it and face it myself, and I don't want to be hurt again. (Did Lam Fung hurt you too deeply?) I don't want to say."

Lin Si Nga said that when she saw her intimate scene with Kelvin Kwan Chor Yiu and her own shower scene, she was a little embarrassed and covered her eyes with her hand.

The cast not only gave away posters but also condoms. Chan Yuen Wai was the most excited. Did she feel embarrassed? She said, "No. (It's like a fish tank.) No, it's just a promotion!" Soon, the police arrived to write a summons for obstruction of traffic and warned them to leave within ten minutes. They not only ignored the police but also got off the vehicle to keep giving away condoms. Lin Si Nga only gave away posters all night. Was she embarrassed? She said, "Just dividing up the jobs." When the actresses posed for group photos, everyone put the condoms in their hands into Liu Yuqi's hands. She was surprised and screamed out of embarrassment.
Posted by hktopten at 7:34 PM