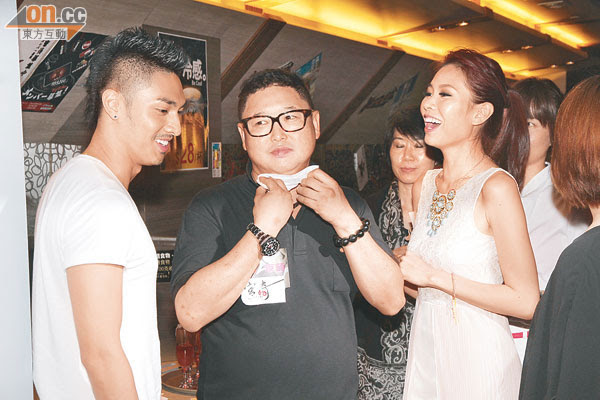 Mia revealed that earlier her boyfriend went to see the movie in support, but halfway through he left in a jealous rage. She said, "Perhaps because the climate was too hot and humid, I would send him a punching bag for release. (Will you skinny dip with your boyfriend to celebrate the box office success?) Right now it's still a little off, but it would be inconvenient with my boyfriend. I am better off with my own children." Avis also said that his girlfriend Chrissie Chau Sau Na saw the movie, but her review broke his heart. He said, "She said that my acting still won't catch up to hers in ten years, when I heard that I wanted to cry."

Chan Yuen Wai who was "felt up" during a city promotion earlier admitted that she was upset afterward, but the company has already followed up on the matter. As for rumored boyfriend Chin Kwok Wai blowing up on the spot that day, she only said that Wilson as the director did not want the actors to be molested. Getting upset was very normal.
Posted by hktopten at 3:49 PM