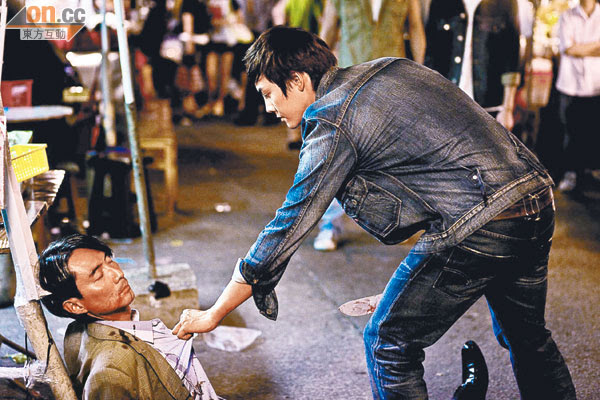 The new film TRIAD (JAT JIK) had many actor fights and chases. Earlier William Chan Wai Ting, Derek Tsang Kwok Cheung and Edward Chui Woai Tung even dressed like Wise Guys and stepped onto the streets of Yau Ma Tei for a scene in which they pursued the Lam Lei played mob boss Temper Ming.

In the fight between two gangs of Wise Guys, Tsang Kwok Cheung who was busted over in order to dodge Temper Ming's strike ran in the busy streets of Yau Ma Tei. Because Tsang Kwok Cheung's bloodied look was too realistic, pedestrians were shocked and thought a mob hit was taking place. Some were able to call the police. When the director yelled "cut" they realized that they were only making a movie.

Later Tsang Kwok Cheung said, "I have never run that far in one breath. After the cameras stopped I felt like my lungs were about to explode." Speaking of scaring some pedestrians, he said, "During the shoot I already gave my all and ran, hoping that I was able to finish it in one take. With blood on my face people truly were terrified."
Posted by hktopten at 10:33 AM