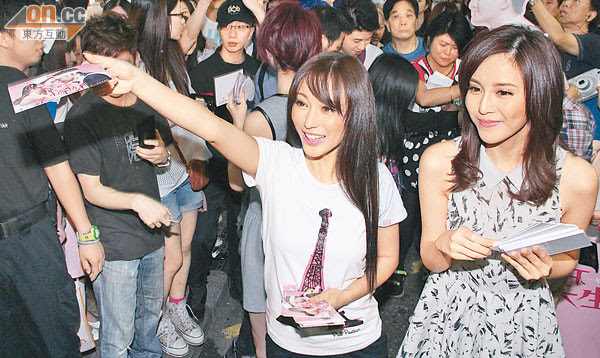 The film NATURAL BORN LOVERS (TIN SUN OI CHING KONG) director Patrick Kong (Yip Lim Sum) and actors Julian Cheung Chi Lam, Annie Liu (Lau Sum Yau) and Sukie Shek Wing Lei yesterday promoted in West Kowloon. When the leads played games with fans, a male fan even pretended to kiss Sum Yau. Admitting that he was very tired from his series production, Chi Lam who only attended with a shell of himself noticed the news that Lo Fun came in eighth among the Golden goddess survey and ahead of Sum Yau. He joked that after yesterday Sum Yau was able to get ahead.

Earlier Chi Lam publicly scolded a TVB production assistant and led to an overwhelming response. He denied that he would have to host a make up banquet and did not want to talk about the matter anymore. In the film, Chi Lam said that he was a jerk in Sum Yau's eyes, but his girlfriend has never called him a jerk because they were able to remain friends after breaking up. His wife Anita Yuen Wing Yi not only would not call him a jerk but worship him more and more. He said confidently, "She like to watch my performance and listen to my songs, she is my number one fan. (Are you your son's number one idol?) Right, recently the character he played at school was a pilot. (Maybe he likes Francis Ng Chun Yu?) At the time he wasn't born yet." Children often played pilots and fire fights. Chi Lam admitted, "Maybe I thought too much!" He also said that when TRIUMPH IN THE SKIES 2 will air he will permit his son to watch. He even showed his intimate scene with Fala Chen so he could learn about acting early on. In addition, this time the film company made 1,000 1:6 figures of Sum Yau. Each sold for HK$800. When Sum Yau posted with the figure and Chi Lam, he said, "I really want to look under its dress, what a pervert."

Sum Yau two nights ago with the director, Ava Yu Kiu and Shek Wing Lei gave away postcards in Mongkok to promote the film. Sum Yau who has rarely been to Mongkok was very excited to see so many people, and said that recently she learned fencing and would be able to protect herself and reporters. She even boasted that she was even more agile than her bodyguards. Did she have a sword on her? She said, "I have a sword in my heart." Sum Yau said that she once worked on a film in Mongkok, due to too many onlookers taking photos the production progress was hindered. Thus two nights ago she was already prepared mentally; she still praised the fans for being very nice and not trying to do anything excessive with her. She also revealed that in her school day she ran into a flasher and was stunned, he looked very pleased. She already learned fencing to protect herself and believed that she would not be afraid if she ran into another pervert again. In addition, this was Yu Kiu's first film. However her first line was already foul language. She even had to call Chi Lam "PK, a kept man and has AIDS". She said that in real life she would at most call guys jerks or no girl would like them. She absolutely would not use foul language.
Posted by hktopten at 5:46 PM