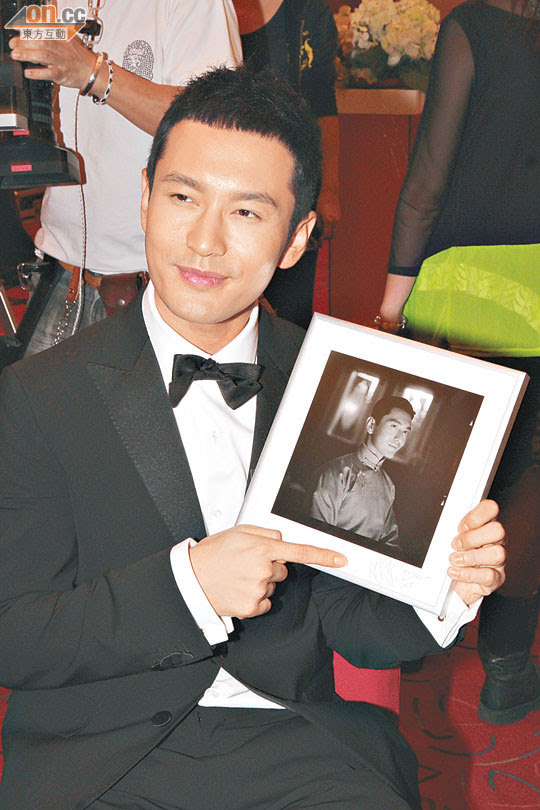 Chow Yun Fat, Sammo Hung Kam Bo, Huang Xiaoming, Francis Ng Chun Yu and three directors Wong Jing, Andrew Lau Wai Keung and Manfred Wong Jun yesterday attended THE LAST TYCOON (DAI SEUNG HOI)'s Kowloon Bay press conference. To coordinate with the theme the venue set up an altar and arranged for Xiaoming to kneel to Fat Gor to become his disciple and receive the Dragon Head staff from his hands. When they took their seats they obviously offered their seats to the other politely. Fat Gor joked that because Xiaoming is now the boss, he is just a little brother; however finally he still was willing to take the seat. Xiaoming felt that from now on he has someone watching over him. Fat Gor joked, "How can I watch over such a big star? If I have to take care someone I would take care of Baby. We both have our ways. I also like handsome man, you are a handsome baby, that one is AngelaBaby!" Xiaoming awkwardly giggled and did not know how to respond.

Aside from Xiaoming, three Best Actors united. Sammo even worked with Fat Gor for the first time on screen. Fat Gor revealed that Sammo was the producer of his film HONG KONG 1941 (DUN DOI LAI MING) and thanked him for giving him the chance back then and for his Golden Horse Best Actor. Sammo also said that he looked forward to this collaboration very much because he knew it had many dramatic scenes. Regrettably in the end they played brothers and not rivals. He only hoped that next time they would be able to have an argument scene and set off even greater sparks. However he joked that the bed scene could be saved. Fat Gor said without any hesitation, "Wow! You would crush me to death, I am now thin now!" Fat Gor then kept the jokes rolling. When asked how this film differed from LET THE BULLETS FLY, Fat Gor joked that at the time he had to play two character but now it is like two people playing one role. He not only felt easier but even half the salary went to Xiaoming. Actually he even wanted to give 30% to him so he would perform better, but his wife was unwilling.

Earlier Chun Yu on a program praised how fast Fat Gor was able to get into character and hold down the set. Fat Gor joked, "Mainly it's because I haven't showered for several days, I didn't wash my underwear so I was able to hold down the set. However it is because I am very familiar with the entire group. The set was very relaxing, only Director Lau can kill. Anyone with eyes, ears, mouths and noses dies. Thus we pretended we couldn't see him. He has several dozen weapons, with a gun he could kill people too! Back then with CITY ON FIRE (LUNG FU FUNG WON) he was a cinematographer, now he is a big time director. Since he is leading the set, I used a pair of underwear to cover his face and crush him!" Lau Wai Keung did not know whether to laugh or to cry, only saying that he had no comment.

Lau Wai Keung was not the only "victim", even Wong Jing was not spared. When Wong Jing praised how well the explosion scenes in the film were done, because the entire team coordinated he was not nervous. Fat Gor joked that because he was only looking at the monitor, he was so cool since only Chow Yun Fat would die. Yet Fat Gor did not forget to praise that the explosion special effects were indeed great and praised by name Xiaoming and Chun Yu. He felt that this year's Best Actor will have to be Xiaoming, while Chun Yu was able to make him very excited. Because he had no idea what he would do next he had to stay alert. In addition, THE LAST TYCOON will face Jackie Chan's CZ12 and Wong Kar Wai's THE GRANDMASTERS (YUT DOI JUNG SI). Fat Gor felt that THE LAST TYCOON genre is very rare in recent years, actually each has its own advantage and he wished all three films will have good box office.

Afterward Xiaoming said that he could not hear what everyone said. He only heard Fat Gor kept saying Baby. Has he brought her to meet Fat Gor? Xiaoming smiled sweetly and did not know how to answer, he only asked the media to ask the next question and changed the subject to say that he and Fat Gor maintained contact privately. He invited Fat Gor and Fat Soh to visit Qingdao. Xiaoming said, "However Fat Gor said that since I wasn't sleeping with him why would he come. That day he gave me an autographed black and white photo, he took one for every actor on the set. It was truly very pretty. I definitely will put this photo in the most important spot at home."
Posted by hktopten at 6:01 PM