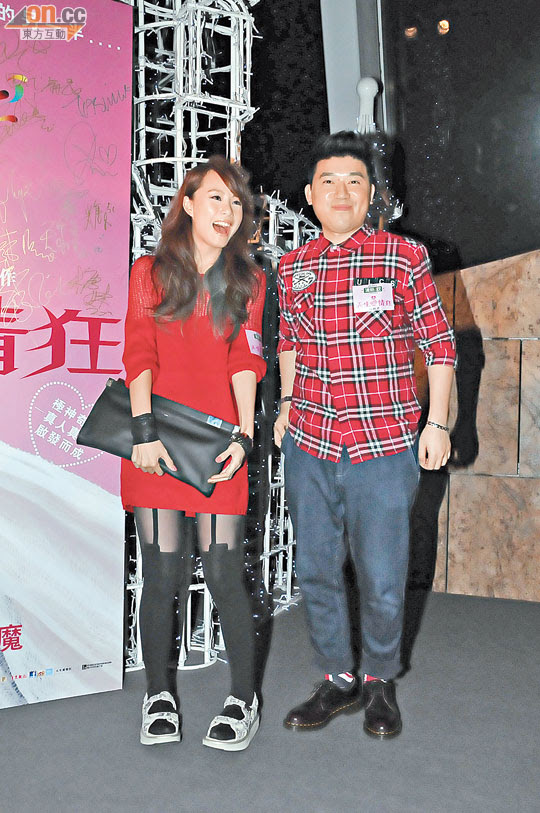 The trio caused a stir in Mongkok and finally stayed for only ten minutes. Chilam and Sum Yau later met up with co-stars Oscar Leung Lit Wai, Mandy Wong Chi Man, Ava Yu Kiu, Jinny Ng Yeuk Hei at hte premiere. Many artists like Stephy Tang Lai Yun, Wilson Chin Kwok Wai, Sugar Club, HotCha, Jason Chan Pak Yu, Mia Chen and Mr. and Mrs. Kent Cheng Juk Si came in support. Chilam said that the city promotion was tough on the high heel wearing Lau Sum Yau. He even said that because of the chaos he and the director teamed up to take her into custody for her protection when she gave away presents. Sum Yau revealed that that giving away postcards in the city in high heels was a huge challenge. As for a crazed male fan asking her for a kiss at a promotion, Sum Yau said, "I think he was quite an actor because he know how to take advantage of positioning. I didn't feel any contact from him!" Was she afraid? Sum Yau said, "If he touched me I would have been! However no matter what I would tough it out. If he truly touched me I might push him away!" The film company released a nurse doll with Sum Yau's likeness, and she could not let it go. Chilam revealed that his son liked Sister Sum Yau and would like to buy a limited edition figure for him. Has Chilam thought about releasing his own figure? He said, "no, people may use it as a dart!"
Posted by hktopten at 2:48 PM