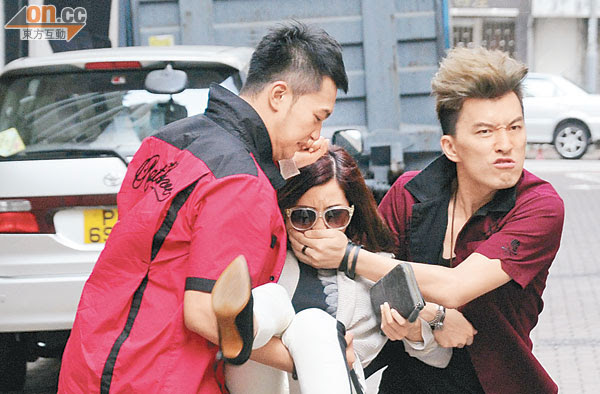 Charlene Choi Cheuk Yin and Chapman To Man Jat recently worked together on the Emperor Motion Picture new film SUPER MANAGER (CHIU CUP GAING LEI YUN). Playing a manager in the film, Ah Sa joked that she swapped identities from the troublemaker to maintaining order this time. Her manner of speech also differed drastically. She also revealed that Gillian Chung Yun Tung has already returned home to rest after her appendicitis operation. She even saved a great character for Ah Gil to guest star in and they will have to shoot in Korea.

In the story Ah Sa brought her company's female artist to pick out clothing at a fashion store and boss Ah Jat paid. Before places they chatted and laughed. Ah Sa and other actresses even exchanged beauty tips.

Ah Jat praised that with Ah Jat on the set, the atmosphere would definitely be great. Although Ah Jat often improvised, she was able to handle it. She said Ah Jat not only helped her but also other new comers, so they knew how to make their characters stand out in the film. Speaking of her character, Ah Sa joked, "I always have to look the part, which is very different from before. In the past I often played the troublemaker, now I have to maintain order. I also have a lot of information to remember. Because the manner of speech is different from normal, sometimes I would deliver the lines out of order."

Ah Jat said that he and Ah Sa have worked on the film for a dozen days or so. At first they were not too familiar, later he thought that they got along well and became friends. Ah Jat joked that he had "Hong Kong Women Phobia", but Ah Sa was easy going and happy. She was not arrogant at all and was very suitable to be friends with. Sometimes after work they would go to dinner together. He said, "Outsiders always feel co-workers would always get along, but we have to be on the same wavelength to be friends. Ah Sa is one of the friends like that."

Ah Jat revealed earlier that he met with Leon Lai Ming. Yesterday he said that Lai Ming was not in Hong Kong so he still has not yet seen him. He has sent him a text message and received an OK reply. He said, "Although Lai Ming doesn't talk much, he is a very manly man. Between men not much needs to be said. A greeting call is enough, especially when now is a sensitive period. For now I don't want to disturb him. (Will you introduce girls to Lai Ming?) I don't have any source." Reporters said that he always said he wanted to introduce a guy to Fiona Sit Hoi Kei, why not match her with Lai Ming? Ah Jat reacted, "As a brother I don't want to hurt him. Fiona is a top notch friend, but she is a Christian and can't have pre-marital sex. As a couple that's hard to deal with, as a friend that doesn't matter."

Yesterday Ah Sa, To Man Jat, Deep Ng Ho Hong yesterday worked on the film in Tai Kok Tsui. In the story Deep carried away Ah Sa by force. Deep said that Ah Sa was a light as a stack of light. Ah Sa said, "I am 100 pounds! I want to be fatter, I am already eating a lot but I am not getting fat. I used to be 103 pounds, I was so happy that I was 3 pounds heavier!"

Ah Sa said that her appetite was great. "Even if I am busier, flying all over my appetite is still unaffected. However I have been so tired that I didn't know how to deliver the lines. That day with the final shot of the day, I delivered all the lines in the first two takes, by the third everything turned very, very slow. I remembered the lines but couldn't organize them. I was so mad, after work I went for a massage. I don't know if all the fire went out, I was fine the next day!"

Ah Jat said that he has been so busy that he has not have the time to pick out what to wear to the Golden Horse Award. "Later I will have to work in Korea and Hangzhou. I won't have time to shop for clothes." Will he ask his wife Krystal Tin Yui Kei for help? Ah Jat said that his wife was busier than he was. "She is working on a TVB series. She not only doesn't have time to help me with clothes, she probably won't get time off to go to the Golden Horse Award! I used to be desperate for an award, now after making a movie that made money for the boss and made me happy, my mission has been accomplished. Without any time to shop for clothes, I will just wear something old. It's more environmentally friendly!"
Posted by hktopten at 3:25 PM