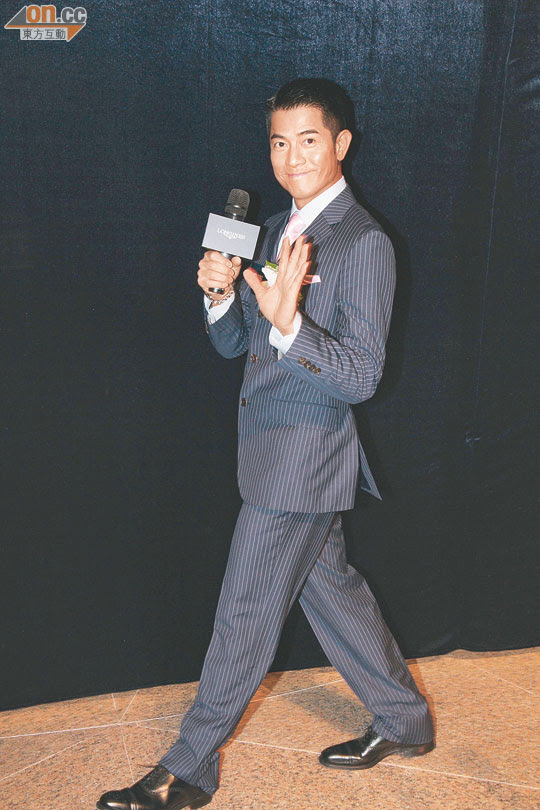 Aaron Kwok Fu Sing yesterday attended a watch exhibition. With his birthday Friday, he received a limited edition watch. Sing Sing also just received the New York Chinese Film Festival Most Outstanding Asian Artist award. Sandra Ng Kwan Yu and Zhang Ziyi also attended and received awards. Sing Sing revealed that Ziyi left early because she was working on a movie. They did not share the stage, which he regretted a little. Yet being able to receive the award from his idol Alan Alda, he was very happy. He continued, "I too am a multi-purpose artist. This award to me is a type of recognition, but of course in comparison to Alan Alda a five time Emmy Award winner, I am no big deal. Hopefully in the future I can have his achievement." Sing Sing also said that every gift has a special meaning, but this time he personally flew to New York to accept the award. He felt very honored and thus this award to him was a very valuable present. At the same time, Alan Alda even expressed that everyone had to move forward. He felt that was his show business work principle as well.

Will he celebrate? Sing Sing admitted that he was a workaholic and would not deliberate take time off. He explained why he claimed to be younger. Sing Sing said that at the time he only said that every year he would reduce his age to remind himself to stay at his best shape. Of course this also meant that he was a year older and he absolutely did not have amnesia. Sing Sing said, "I am 47. However I only said that every year I would take a year off, for example I turn 90 I would become a baby again. Seniors are like babies!" Will he celebrate his birthday with his girlfriend Lynn Xiong (Hung Doi Lam) and already set a wedding date? He said that he would not respond to personal matter. He said that this year's birthday wish is not to respond to questions about his personal and private life.

In addition, Kwok Fu Sing took 20 minutes before returning to Hong Kong to gauge the audience reaction to his film DIVERGENCE (SAM CHA HAU) at the Times Square AMC cinema. He originally wanted to surprise the audience, but was instead surprised when the audience presented him with his first birthday cake this year. The audience said the birthday song and sent their heart felt good wishes. The film festival organizers also gave him an American football jersey due to his love for sport and wished him youthful energy forever and good health.

Sing Sing was in great spirits and did not turn away any enthusiastic fans' request for photos and autographs. A fan even expressed love for him. "You are very handsome, I like you very much!" Sing Sing stayed for almost 40 minutes at the cinemas before the crew ushered him to airport. While in New York, Sing Sing rewarded the workers with 4 lbs. lobsters and local seafood.
Posted by hktopten at 2:50 PM