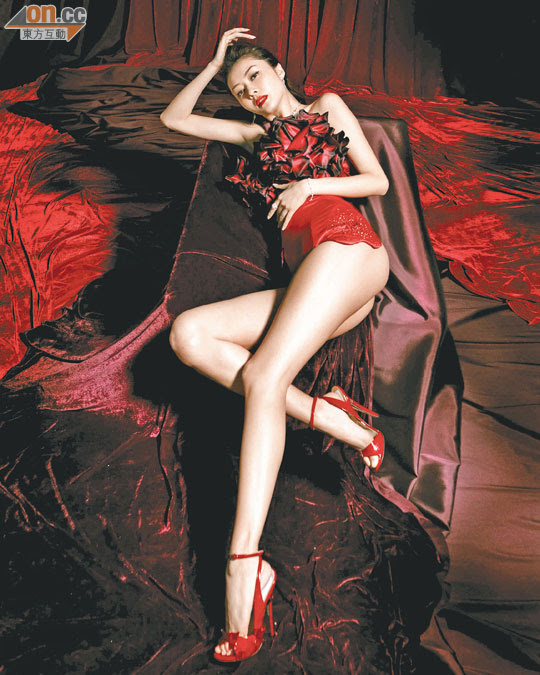 AngelaBaby, Lynn Xiong (Hung Doi Lam) earlier led Style Models to the 2013 calendar shoot. They included Mikki Yao, Masha Gu, Winnie Zeng and others. The calendar theme was carnival, for which Faye Wong's official designer TiTi Kwan was in charge of and the photographer for the first time for.

Baby put on white feathers and turned nto an angel to open the calendar. On the day of the shoot she just got off the plane, she did not rest for a moment at all before rushing to the studio. She said, "As long as I am working I am alert. This is the annual calendar shoot, how can I miss it. It's a rare occasion to be together with all the co-workers at the company, it's like a party. I remember one year when we shot on a yacht, it was more like a cruise than work. I had a lot of fun."

This time was Baby's first time as an angel and it felt very refreshing to her. She did not stop at all as she waited to take her mark, as she impersonated Korean performer PSY's GANGNAM STYLE and gave TiTi a massage. She provided a lot of entertainment to everyone.

February belonged to the fiery Hung Doi Lam. She kept on moving her legs on the sofa in a tempting manner. Lynn said, "With this top I almost couldn't breathe and have a hard time posing. I have never been this sexy, showing the side of the pat pat. I worried about wardrobe malfunction so I had to be very careful with every move. I also had to kept moving on a hard chair, I was all stiff from the shoot."

Aside from models Baby, Lynn, Masha, Mikki, Liu Dan and others, this year Style Model 2013 calendar added several new comers like the only male model Han Huohuo, Hilary Tsui Ho Ying and a pair of young models Hillary and Fiona. Tsui Ho Ying who participated in her first calendar shoot said that her month was the Thanksgiving representative November, which was very suitable for her identity. She wore a lace dress that was unknowingly sexy and very interesting. Another mother class calendar girl was the post birth Liu Dan.
Posted by hktopten at 12:47 PM