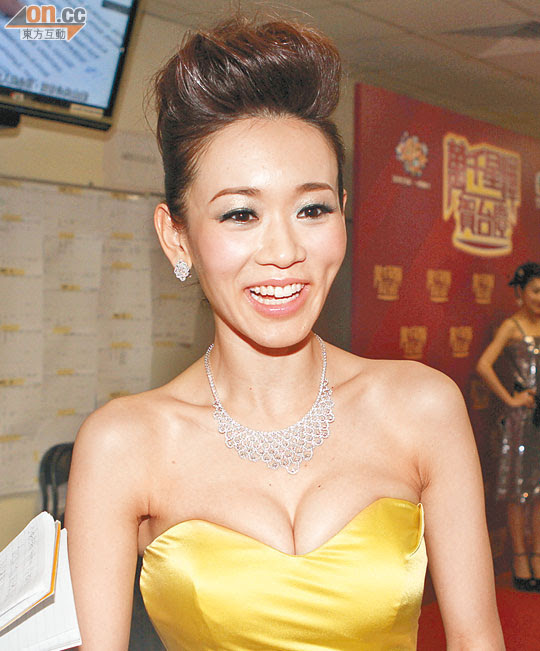 The TVB Anniversary Show took place last night in Television City. Every year Eric Tsang Chi Wai does his best to obliterate his co-stars. Last night he turned into a wet nurse to fed "King Kong BB" and "Chan Ho BB". King Kong suffered the worse because he not only had milk thrown at him but also had to eat Chi Wai's "back wash rice".

Last night's program not only had song and dance but also comedy from artists of this year's two anniversary series THE CONFIDANT (DAI TAI GAM) and SILVER SPOON,STERLING SHACKLES (MING WOON MONG JOOK). "Team Phoenix" Nancy Sit Ka Yin, Sharon Chan Man Chi, Krystal Tin Yui Nei and Sheung Tin Ngor donned male disguises to play the "eunuch castration story". Tin Yui Nei pretended to castrate Sister Ka Yin, suddenly took out a banana and chopped like mad. Then she pointed at senior eunuch Sister Ngor's lower body and said "167", obviously a homophone play. Later "Team Dragon" Moses Chan Ho, Roger Kwok Chun On, Wayne Lai Yiu Cheung and Michael Tse Tin Wa played the four wives of SILVER SPOON, STERLING SHACKLES. Chan Ho played Tavia Yeung Yi, Cheung Jai played Idy Chan Yuk Lin, Tse Tin Wa played Elena Kong Mei Yi in fish net stockings with leg hair, On Jai played Han Ma Lei, they and the Nat Chan Pak Cheung played Damien Lau Chung Yun played with "heavy flavored" intimate contact. Chan Ho bit giant red lips and reprise the lip biting scene between Brother Chung and Yeung Yi. The other three wives charged Lek Gor, who appeared in be a lot of pain. During the interview, Chan Ho remained in character and kept making passes. He revealed that he ordered a pair of four inch high heels to be convincing, but he did not have the nose that Yeung Yi was best known for. He said, "Right! Good point! (Are you afraid of angering Yeung Yi?) No, we are just playing." He also was not afraid of scaring off girlfriend Aimee Chan Yan Mei; but when reporters asked Chan Yan Mei to get closer to Chan Ho, she was not willing no matter what. Yeung Yi was absent last night, reportedly because due to injury from working on the series A GREAT WAY TO CARE II.

As for the anniversary show STAR CLASS NURSERY SCHOOL, it as usual was being gross and dirty. King Kong and Chan Ho played babies, Chi Wai played a wet nurse, Samantha Ko Hoi Ning played a nurse. King Kong suffered as Chi Wai not only kept stuffing rice that he already chewed into his mouth but also kept spraying King Kong with the milk bottle. After King Kong, Chan Yan Mei appeared with boyfriend "Chan Ho BB". Chi Wai of course added on as he kept tossing milk powder, coffee powder and water at Chan Ho's face. Chan Yan Mei tried her best to protect her boyfriend but to no avail, as she could only giggle on the side and scream "no". Finally Chi Wai even used baby powder, luckily she was fast enough to grab and pretend her boyfriend from further powder torture. Chi Wai remained unwavering as he brought a birthday cake and Chan Ho to Norman Leung Nai Peng to sing the birthday song, then took the chance to again stuff Chan Ho into the cake. Chan Ho smartly dodged but they made Leung Nai Peng very happy. Later Chan Yan Mei was asked whether her heart ached over her boyfriend being abused? She said, "No, I just wanted to protect him but it was a lot of fun."

The Gods Yeung Siu Cheung, Wong Cho Nam and Johnson Lee Si Jit saluted elders with impersonations. Liu Wai Hung even personally appeared on the program and shared his impersonation secrets: no matter what the impersonation was, first you have to make yourself laugh. During the interview, Cho Nam broke down and explained that Ah Chan was his idol. He was reminded of his childhood memories. Ah Chan deliberated rushed from the Mainland so he felt even happier and more touched.

This year's anniversary lucky drawing also tried something new as artists played games at every segment. Chan Yan Mei and JJ Jia (Ga Hiu Sun) were arranged to sit in two chairs, then male artists sat on them and pushed. Chan Yan Mei's partner of course was her boyfriend Chan Ho. Chan Ho in order to protect his girlfriend from wardrobe malfunction would rather suffer himself. Last night six big laisees were presented, Mimi Choo, Tang Ying Man, Sit Ka Yin, Wong Cho Nam, William Chak and others won. Raymond Lam Fung won the HK$50,000 credit, the others won 10,000 to 20,000. The Anniversary show went to Lai Yiu Yeung who won the HK$1 million prize, the second prize went to Wai Ka Hung with HK$200,000 worth of prizes, the third prize went to THE VOICE 3 first runner up Jay Fung Won Him who won 100,000 worth of prize. Later Cheung Jai said that he would treat everyone to dinner to celebrate and said that he has never won any prize after years in TVB. This time was an all at once gift to him. With such luck was he confident about winning the Best Actor? He said that he did not know because the Best Actor was about substance and not luck. However he hoped this was a good start.

Last night not only all the artists of the station performed, TVB's bosses also appeared. Although Uncle Six Siu Yat Fu (Sir Run Run Shaw) this year remained absent, Aunt Six Mona Fong Yat Wa attended along with new boss Chan Kwok Keung, TVB CEO Leung Nai Peng and others. They toasted to guests and posed for photos at the party. As for Uncle Six's absence, TVB's Tsang Sing Ming said that because Uncle Six has already handed over the CEO post to Leung Nai Peng, he was only a honorary chair and thus rested and enjoyed the program at home instead. Meanwhile, Susanna Kwan Kuk Ying's US$10 million jewelry lost a gem. The crew immediately looked for Sister Kuk and luckily found it in half a hour.

TVB also made an unprecedented move of publishing a full page ad on all Hong Kong pay newspapers. The advertisement mentioned, "What we need is a stable operation and service environment that permits free television industry to survive and continue to develop." It made its stance on the government issuing more free television station licenses known again.

After the ad, TVB was accused of acting up in front of the Chief Executive to stop the government from issuing more free television license. TVB's Tsang Sing Ming explained, "Because the numbers five and zero are more important to the Chinese, we published the ad to announce TVB's contribution and promotion to the television culture in the past 45 years." Will it try to stop further license issuing? He pointed out that TVB had scheduled meetings with the government and absolutely would not directly speak up.

Last night during the Anniversary Show, TVB also shot a short film with Carol Cheng Yui Ling introducing TVB's contribution and promotion of the past 45 years and reiterating its free license stance. At the same time an announcement was made during the program for the establishment of TVB artist charity fund to help three types of people, those who due to an emergency face financial difficulty, the poor, the weak and the aging. Early next year the HK$30 million fund will begin its operation.
Posted by hktopten at 12:49 PM