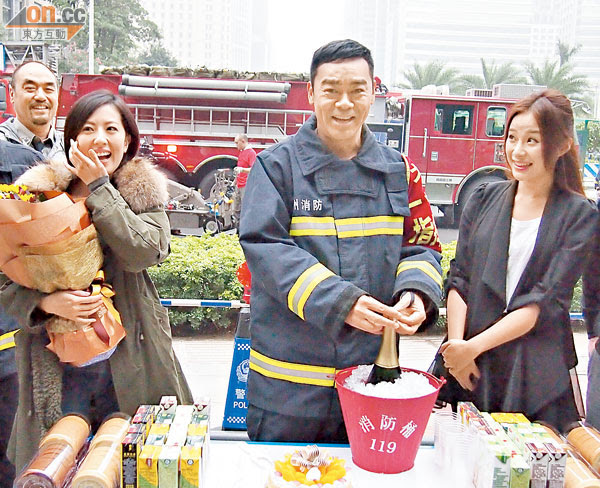 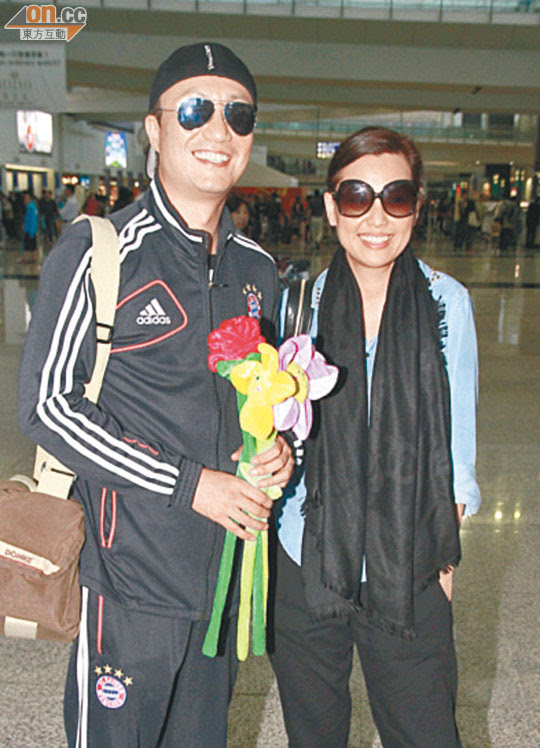 In order to share the joy of the award with the team, Ching Wan treated everyone to cake and beverage as soon as he arrived. The team also prepared champagne, cake and flowers to congratulate Ching Wan on his victory. Natalie Tong Sze Wing who played Louis Koo Tin Lok's girlfriend in the film presented the flowers to Ching Wan. Directors Pang Brothers and producer Daneil Lam Siu Keung shook hands with Ching Wan to congratulate him. They also hoped that he would win Best Actor again with INFERNO next year. Although Ching Wan's personality was reserved, he could not hide his joy and thanked everyone's well wishes.

As for Nicholas Tse Ting and Nick Cheung Ka Fai who did not win the Best Actor, yesterday they and Chin Kar Lok returned to Hong Kong on the same flight. When they saw the reporters they immediately revealed that Ching Wan has already flown to Guangzhou for his film.

Ka Fai felt that Ching wan deserved to win. When the result was announced he was not nervous at all and he saw that Ching Wan was not nervous either. His wife Esther Kwan Wing Ho did not accompany him to Taiwan, did he have less support? Ka Fai joked, "My wife isn't a lucky charm, if I win I win, if I lose I lose. My wife is working on a series." Ting Fung also said that he expected Ching wan to win. Speaking of him being happier than Ching Wan in the audience, Ting Fung joked, "They got that too? Earlier he and I worked together on THE BULLET VANISHES (SIU SUT DIK JI DAN). I really wanted him to win."

Chin Kar Lok won the Best Action Choreography Award. He even took the award out of his luggage and posed with it to fulfill reporters' request. He said, that night his wife (Angela Tong Ying Ying) was having dinner with the family and watching him win the award. Since his two partners were unable to attend, he had to carry three awards that felt very heavy. Luckily Peter Lam Kin Ngok had a private plane and helped him with the other two awards. Why did he not ride back with him? Kar Lok joked, "He didn't ask me."

Best Supporting Actor Ronald Cheng Chung Kei and his wife Sammie Yu Man Si also returned to Hong Kong. A female fan presented toy flowers to him. He said that two nights ago after the celebration banquet he returned to the hotel and ate with his wife to celebrate. Reporters said that his daughter was lucky for him and he agreed. He even revealed that last night he would continue to eat at home to celebrate. The award will be placed in his father's study.

Today Chung Kei has to go to Hengdian for a film and will not return to Hong Kong until he finishes in January. Hengdian is very cold right now, and he still had to take an over 2 hour ride from the airport before arriving at the location. He was afraid that his daughter would not be able to tolerate it and Yu Man Si would not bring her to visit the set.

In addition, two nights ago after the Golden Horse award ended, Lam Kin Ngok booked a restaurant to celebrate. Attendees included Mr. and Mrs. Lau Ching wan, Ko Chen-Tung, Chin Kar Lok, Richie Jen (Yam Yin Chai) and Denise Ho Wan Si. Kar Lok did not forget to thank his mentor Sammo Hung Kam Bo. He said, "Honestly, this time being nominated with him I didn't dare to think to much. However when my name was announced on the stage, I truly couldn't be happier." Speaking of being nominated again next year with COLD WAR (HONG JIN), Kar Lok admitted that he was looking forward to the COLD WAR sequel more.

Ching Wan said that he definitely had to treat Cheung Ka Fai to dinner. What did his wife give him to congratulate him? Ching Wan only said, "I hope she would make a delicious meal for me."
Posted by hktopten at 1:51 PM