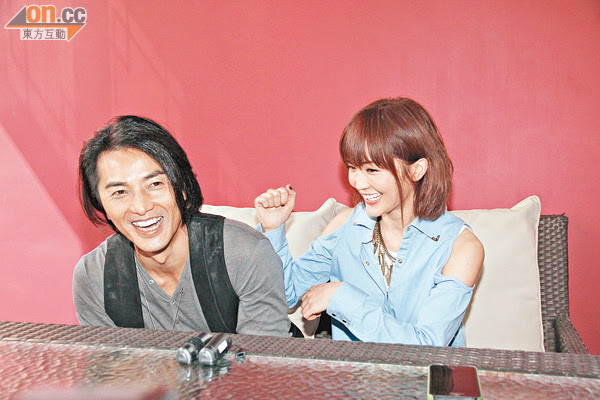 Dior Cheng Yi Kin and Charlene Choi Cheuk Yin after working together on the film MY WIFE IS EIGHTEEN (NGOR LO POR NG GAU CHING) ten years ago ten years later reunited for MY SASSY HUBBY (NGOR LO GUNG NG SUN SING). Working together again ten years later, Ah Sa said, "I don't know what Ekin eats, his look hasn't changed at all like he had preservatives. I got older." Ah Sa wanted to keep the couple relationship with Ekin going and even gave the director ideas, in the future they could make MY SASSY GRANNY or MY SASSY BABY.

Ah Sa revealed that this time like last time she loved to torture Ekin. For example while Ekin was asleep she would throw a basin of water on his head, in the shower she would suddenly cut off his water, electricity and force feed cake to Ekin. In real life would she treat her boyfriend William Chan Wai Ting this way? Ah Sa did not respond but Ekin said, "It's not the first time you were asked, what are you embarrassed about!" Would Yoyo Mung ka Wai torture him like this? Ekin said that Yoyo was not a sassy girlfriend and would not throw tantrums at him. However she would not go along with him all the time either. Ekin said, "I don't know how Ah Sa behaves with William, but I know she loves him very much!"
Posted by hktopten at 2:11 PM