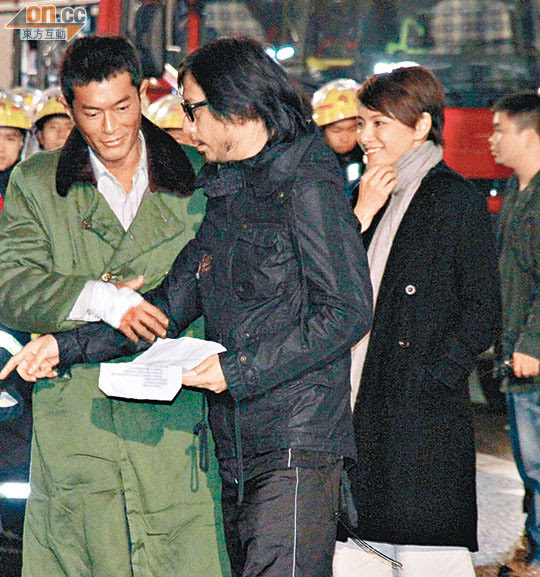 Fresh out of the oven Golden Horse Best Actor Lau Ching Wan along with Angelica Lee Sinjie, Louis Koo Tin Lok two nights ago worked on the 3D disaster film INFERNO (TOH CHOOK SUN TIN) in Guangzhou. The team applied for road blocks in the financial area for five nights, 15 fire engines and 60 real fire fighters, ambulances and police cars, over 100 extras to play emergency medical teams, victims, onlookers and reporters, and invited 50 Mainland and Hong Kong media outlets to cover he shoot. Directors Pang Brothers admitted that they already expected to exceed the production budget. The film at least will need 8 months of post production and is expected to be released October next year.

Ching Wan said that he has calmed down from the excitement of the award. The most touching was all the people who were happy for him. Some were even happier than he was. Although buddies only send text messages with the word congratulations, but he already planned to return to Hong Kong after finishing this film and invite everyone to dinner to celebrate. Speaking of his wife Amy Kwok Oi Ming's tears of joy in the audience, Ching Wan sweetly said, "What can I do! She should be happy." As for the moment of his victory became the evening's most watched period, he felt that it had nothing to do with his victory, only that many people wanted to know who won.

Speaking of his raise to 10 million after the award, he joked, "If I didn't win I wouldn't get a raise, after I won of course I have to get a raise! However next year's work has already been scheduled, the raise will have to wait a few more years. Actually working class guys like us are often joked about. Sometimes it's not up to me to say how much the raise will be. The market is calculated." Ching Wan in the film had many dangerous stunts but during the shoot he was very careful and was not injured.

Lee Sinjie pointed out that the film had a lot of dangerous stunts. She was the most afraid of fire and explosion scenes, she was so scared that she did not need to act before showing her real side. Did she receive any special attention from her director and husband Oxide Pang Shun? She said, "The directors at first were still not pleased with the size of the fire and later made it bigger. I felt like my back was burning and I couldn't act, but I didn't feel right about telling the directors to yell cut. Finally I was so hot that before the scene ended I already ran out; the directors asked me if I was fine but told me next time to more 'alert'. If anything happened run first. I was fell on the slippery floor and in so much pain that I wanted to cry, but with so many people looking on I could only smile. Actually the directors took great care of the actors, but they had to take care of so many people. I wouldn't be mad at him for not taking care of me. Goo Jai and Ching Wan also had many dangerous stunts and they were very attentive." Pang Shun said that because he had too much to handle he could only watch Sinjie fall. How would he thank his wife? He said, "Keep shooting!" Why did he not ask the crew to take extra care of his wife? He joked, "If I said it it would have been worse, they would immediately let go of the rope."

Goo Jai said that he had to work wet in the cold, so cold that he could see his breath. Even though the directors took great care of them and prepared hot ginger hot for them, he still felt frozen. He pointed out that during the shoot earlier he cut his right palm on broken glass, luckily it was superficial and did not need stitches. He said, "I could use it for the shoot, it doesn't need make up and is realistic enough. Actually in comparison to last time when I broke my leg and had to take two years to heal, this time had a lot of dangerous stunts but last time was more dangerous than this time."
Posted by hktopten at 1:31 PM